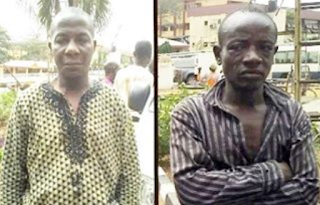 .
Kehinde Olatubosun, 56, was arrested last night by the Rapid Response Squad of the Lagos State Policr Command, along with 18 other drug addicts at a joint in Ipodo, Ikeja and during an interview, he disclosed how he makes N300k monthly from begging.

.
.
His words: “All days of the week, I’m always in Mobolaji Bank Anthony Roundabout, Toyin Street roundabout and Opebi. What I do is that, I get LASUTH drug prescription papers from their waste bin. With this, I convince people that I have a relative who is in dire need of money to buy medications.
.
.
I have been doing this since I was deported from Germany in 2004, for being in possession of hard drugs. Before the deportation, I was working as Electrical Engineer in Bauhusa, Colon, Germany. I was in Germany for 12 years. I have 4 children. .
.
Two are in Germany with my wife. One is in Texas, USA and another in Nigeria. Unfortunately, all the money I make from this begging goes into drugs.” Another arrested drug suspect, Dada Ajayi, 48, said that addiction had destroyed his life. He said: “‎I am trying to get over it now; drug has been the cause of my stagnation in life.
.
.
I have been hooked for over 17 years. ‎As I talk to you, the remains of my wife is in LASUTH mortuary. I was asked to bring N150k for surgery but I didn’t have N50k on me then. She died in the process. Right now, I have lost my family because of my drug addiction. .
.
I don’t know where my children are or how to start my life again. I can’t stop going to that drug joint because it is the only place where I get consolation. It is the only place I’m at peace with myself. If anybody want to help us, they should arrest the drug barons. .
.
Arresting us won’t solve the problem because without the sellers there won’t be the takers. You arrest the dealers, then, you have cut the supply and thus saved us from getting drugs. Without that, we would always find our ways there whenever we are released.”

Marry her instead of promoting premarital sex | Nigerians condemn Iceprince for cuddling up with girlfriend after cheating scandal
Nigerian SS3 student builds car, drives it to school in Kebbi (photos)
To Top