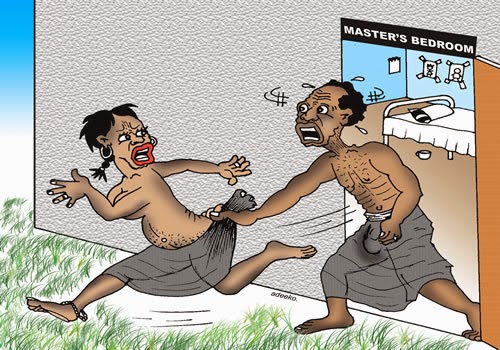 There was laughter at the Sharia Court, Samaru, Gusau, Zamfara State,  during
the week, when a housewife, Aisha Dannupawa, asked the court to dissolve her
one-week marriage to her husband, Ali Maizinari, because she could not bear the
size of his penis.

According to Tribune, the woman told the court that she
married her husband after her first marriage failed.

The mother of three revealed that  before she packed into her husband’s
house, as the tradition
demanded, she was invited into his parents house.

She told the court that “when he came, we had sex but the experience was a
nightmare. Instead of enjoying the sex, it turned out to be something else
because his penis was too big,” she told the court.

She also told the court that after the experience, she took some medication,
which was given to her by her mother.

“I told my mother the experience but she told me to endure and that with time,
I will be able to cope. She then gave me some drugs,’’ she added.

According to her, “two days later when he came to visit me, we had sex again,
but the experience was too much to bear. It was then I knew that I could not
continue with the marriage because of the size of his penis.’’

The husband, Maizinari, did not deny what his wife said. He told the court that
he was willing to divorce her but that she should pay back the dowry and all
that he spent on her during the courtship.

When he was asked to state the amount, Maizinari disclosed that what he
expected from her was N60,000.

President of the court, Alhaji Mamman Shinkafi, told the couple to try
reconciliation before the next date.

breaking news how a marriage can end in one week love gone sour manhood size Naija news news now News Today nigeria news
Share. Facebook Twitter Pinterest LinkedIn Tumblr WhatsApp Email
Previous ArticlePhotos from the Bomb scare that hit the Murtala Mohammed Airport today
Next Article She said she was going to vigil and ended up getting pregnant for another man —Husband