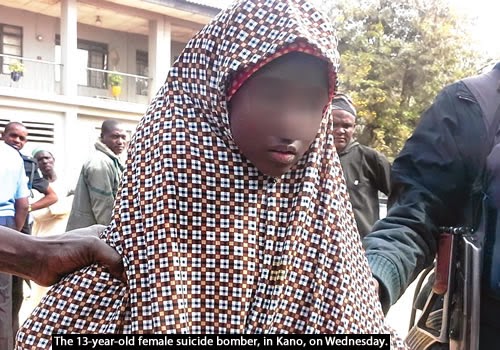 Earlier this week, a 13-year-old suicide bomber, Zarau,  was arrested in the North. She says she did it under duress, after her parents dropped
her at the Boko Haram Camp.
According to the Nigerian Tribune , she
was arrested in a hospital where she was being treated after a
commercial tricycle operator alerted security agents that a female
suicide bomber dropped an unknown exhibit in his tricycle. The security
agents, who immediately swooped into action, subsequently arrested her.

Read Zarau’s account of how she joined Boko Haram below:

‘‘my parents took me to the Boko Haram training camp in Bauchi, where
one of the trainers asked me if I wanted to go to paradise, in my reply
to him, I gladly told him that I will like to enter paradise.

He told me I have an assignment to carry out in Kano, then, after the
necessary training, he told me that I and two other female bombers will
travel to Kano to execute the assignment, so after the execution of the
assignment, she will now be entitled to make paradise.

‘‘But I was told that I would have to die before entering into paradise.
The man further stated that I will have to carry bomb and die, but I
said I cannot do it, he then declared that it is either I accept to do
the work or they dug the ground and bury me alive.it was at this point
my father stepped forward to persuade me to play along, and told me to
prepare to die as martyr and clear the way for him to join me
soon”Afraid to be buried alive, because I saw many that were being
buried alive, I resolved to abide by the order out of duress.

“When we got to Kano, they took us straight to Kantin Kwari Market. When
it was time for the execution, we were told to to divide ourselves and
take position. The other two female suicide bombers detonated their
concealed bombs in their bodies, as we were all wearing
hijab, while on my part, I vehemently refused to ignite mine, as a
result of my closeness to the two female bombers, I was injured on my
left leg by the explosion.

“Due to the injury I sustained, I shouted for help, the commercial
tricycle operator, who sympathised with me, took me to Dawanau, where we
resided with my parents before. However, before I dropped from the
tricycle, I successfully removed the concealed bomb in my body and left it on the seat of the tricycle.
“When the tricycle operator saw the exhibit on the seat, he immediately
dashed into the house where I was taking treatment and asked me whether I
am the owner of the exhibit and I replied him, yes, it is mine. At that
time, I was about to be taken to the hospital, so before the tricycle
operator alerted the security agents, I was already in the hospital,
where I was being treated for the injury I sustained from the explosion.
That was how I was arrested by security agents at the hospital.

According to her, “my parents commissioned me into Boko Haram
activities, because I did not know where they were taking me to. They
handed me over to one of my trainers.’