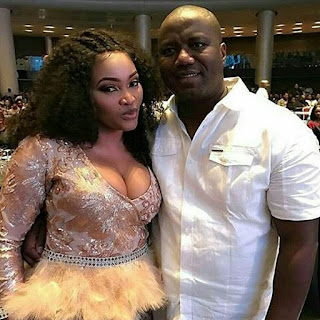 Nollywood actress, Mercy Aigbe’s husband, 52-year-old Lanre Gentry, is still in prison. As a matter of fact, today is his 7th day there.

The hotelier who was docked last week before a Magistrate Court 1
sitting at Ogba, Ikeja, on three count charges under the State Criminal
law 2011, seems not able to meet the bail conditions of N500, 000;
provision of tax verification and two sureties, one of whom must own
property in Lagos State.
But before his appearance before the court another magistrate court
barred Gentry from coming close to the actress and the two children in
her custody.

Gentry, who was alleged to have physically assaulted his actress
wife, Mercy, appeared before the court last Tuesday and pleaded not
guilty to the charges leveled against him by the Lagos State Government.
Recall that the State Government waded into the alleged domestic
violence after the actress reported her attack to the Lagos State
Government through Domestic and Sexual Violence Response Team (DSVRT).

The case was adjourned till July 12.

However, a top Government official disclosed that the actress husband
was unable to meet the bail condition before the end of Friday leading
to his remand in prison.

Meanwhile, Mercy must have become an advocate for the Lagos State Lagos State Domestic and Sexual Violence Response Team.

Lagos State banner
Urging fans and followers to repost because “Someone might be in need of this!