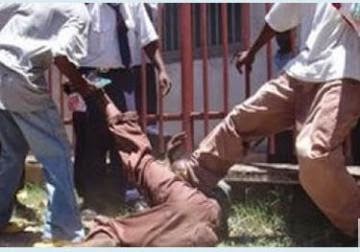 A middle-aged man who happens to be the Personal Assistant to the
Enugu State Governor, Sullivan Chime, narrowly escaped death in the
hands of angry teachers for allegedly impregnating a secondary school
girl in Enugu, Vanguard reports.

The suspect was beaten to pulp and stripped naked for
allegedly impregnating an SS1 student (names withheld) of Metropolitan
Girls Secondary School located at Ogui New Layout, Enugu state.
It all started when the victim suddenly slumped on the ground during
morning assembly on Wednesday, bleeding profusely from her private part.
Upon interrogation however, she gave the name of the aide as being responsible for the pregnancy.
The man was lured to the school and he came not knowing that his dirty deed had been discovered.
When he got to the school, the teachers pounced on him and beat him
mercilessly before handing him over to officials of National Agency for
Prohibition of Trafficking in Persons, NAPTIP, and Nigerian Security
and Civil Defence Corps, NSCDC.
State Commissioner for Education, Professor Uche Okolo confirmed the
incident told  saying “a man was apprehended. The man defiled a girl.
The girl got pregnant. The child was bleeding and rushed to hospital.
The school made a report to NAPTIP. The man came to the school to take
the girl and he was arrested. The good thing is that he has been
apprehended. He should go and face the law”