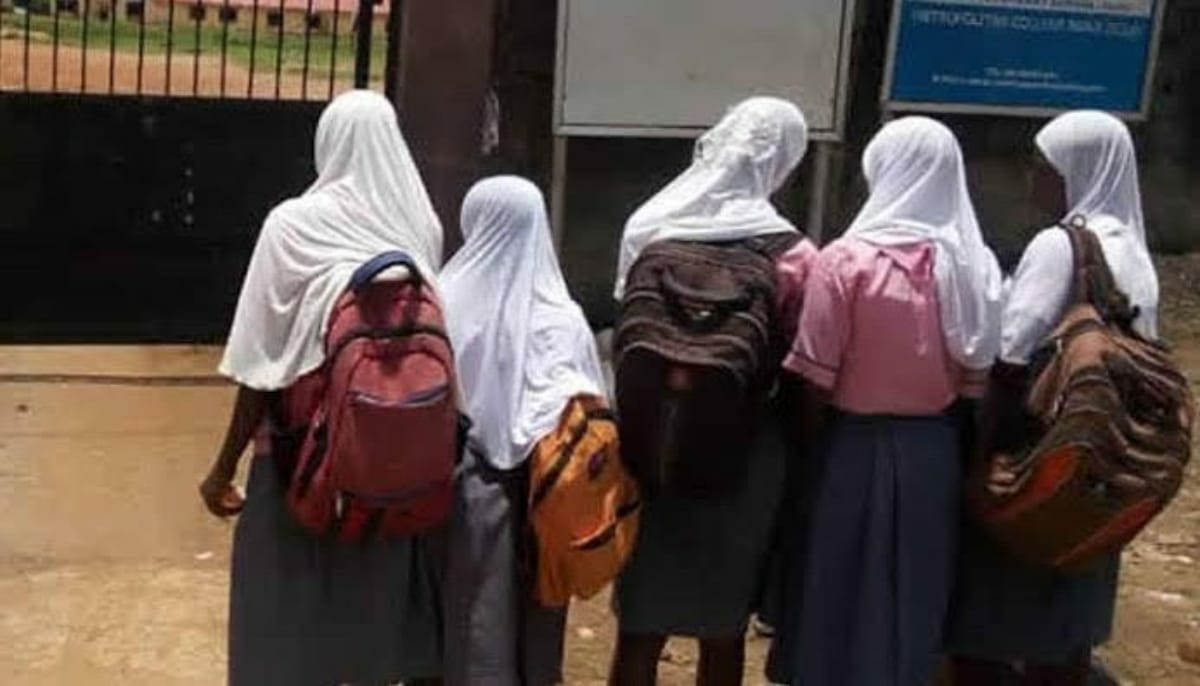 Reports revealed that some students wearing hijab were not allowed entrance into Baptist School, Surulere by some agitated Christians.

An eyewitness told newsmen that the actions led to a disagreement between the Muslim and Christians faithful; the altercation led to a clash and causing warring parties to throw objects at each other.

According to reports, it took the intervention of security agencies to curtail the situation.

While protesting, Christians show placards displaying inscriptions like ‘No Hijab in Baptist Schools and all mission/grant-aided schools’, ‘Otoge, give us back our schools, and many more.

Newsmen gathered that both religious sects had mobilized their members to watch over activities on-going at the reopening of schools on Wednesday.

Reports also reveal that there was a protest at C& S College, Sabo Oke, Ilorin.

The protesting party wore white garments and caps, preventing Muslim pupils from entering the school with their hijab.

The ten schools were shut by the state government on February 19, 2021, after the crisis on Hijab wearing by Muslim students in the school.

The state branch of the Christian Association of Nigeria said that it would not agree to the use of hijab in schools established by Christian missions, saying that they were surprised that the government was trying to make a decision on a matter which is still before the Supreme Court.

The Christain Association of Nigeria, CAN Ilorin chapter said it won’t consent to students using hijab in schools founded by Christain missions, stating that they were taken aback that the government is already making a decision on a matter that is still before the Supreme Court.

CAN said, “The body condemns the use of Hijab in Christian Missions Grant Aided Schools as this will cause discrimination in schools and allow terrorists to easily identify our children and wards.”

The state government on Tuesday declares that the school could reopen on Wednesday, March 17, 2021.

A signed statement by Mrs. Kemi Adeosun, Permanent Secretary, Ministry of Education and Human Capital Development, reveals that “the government is convinced that its policy to allow willing Muslim schoolgirls to wear their hijab in public schools will lead to sustainable peace and communal harmony anchored on mutual respect and understanding.

The statement continued, “As the students resume normal classes, the government took special notice of the plight of those of them preparing for the West African Senior School Certificate Examination and hereby directs affected schools to hold at least two-hour extra lesson for all the intending candidates after school hours daily.

“The government will provide light lunch for the students until the beginning of their exams while teachers allotted for the extra coaching will get stipends for their efforts.

“This is to bring the students up to speed ahead of the impending external examination. The closure of the schools was necessary to forestall security breaches that may affect lives and properties.

“The government sincerely commends the Christian and Muslim leaders for their understandings and their efforts to build peace within their respective communities in the past weeks. It urges everyone to join hands with the government to raise a generation of schoolchildren who will respect one another’s differences and together build a sustainable future for our state.

“Finally, the government reminds all its employees such as school principals and teachers in the affected schools to take special note of the policy. There will be zero tolerance for violations of anyone’s fundamental human rights under their watch.”