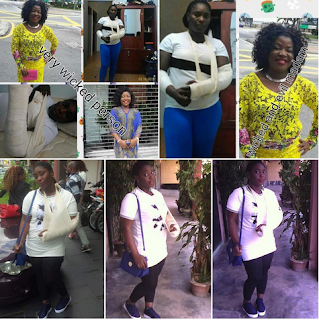 Vivian, 31, was taken to Malaysia from Edo State by a sponsor, Miss Precious Edafe aka Madam Sylvia. Upon getting there, she was turned into a commercial sex worker and always pays 1000rm ( about N50, 000 ) to her madam on a weekly basis.
As time went on, she could not meet up again, because she is considered too old.

.
But her madam wouldn’t have none of that, she allegedly sent boys to kidnap her. She was taken to Nilai, at the back of Legenda College, and beaten with wood till she fainted. Yesterday made it two weeks since the legendary beating happened.
.
.
A report has been made to the Malaysian government and police. Madam Sylvia has also been declared wanted by the Nigerian embassy in Malaysia. Sylvia, who resides at a house in Batu Cave, is now on the run and has since closed down her shop at Mutiara complex, Kuala Lumpur. She is a hair stylist and a human trafficker.
.
.
Vivian’s hand was badly affected by the beating that the doctors have suggested that it should be amputated but she is rejecting suggestion. She is currently planning to return to Nigeria and use alternative ( native ) medicine. She wants justice.