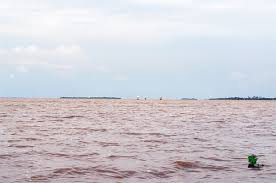 Last Tuesday afternoon, a taxi which plunged into a river along Calabar-Ikom highway was pulled out with three bloated corpses and a survivor!
According to eyewitnesses who spoke to Vanguard, the driver was travelling from Obubra in the central
district of the state to Calabar with four commuters along with the
driver but at Adim, the taxi came close to a head-on collision with a
speeding truck from Calabar which left its lane.

It was learned that to avoid a collision with the truck, the driver swerved the car off the road and plunged into the river.

A source who gave his name as Ekong, disclosed that one of
the commuters, a 21-year-old girl who was travelling with the boyfriend
but miraculously came out of the water was too dazed and temporarily
deaf because of the impact of the crash and could not relate to the
divers which side of the river the taxi plunged.

“The girl was too dazed and had become deaf and so could not explain
which side of the river the taxi plunged into as it was difficult to
make sense of what she was saying apart from saying my boyfriend is
inside. So divers searched for the taxi on the wrong side of the river
for days,”

He said the divers searched for the taxi several miles on the right side
of the river where they thought the taxi might have plunged into until
Saturday when they decided to search the left side of the river.

“Apparently, when the taxi came head-on with the truck, the driver
decided to swerve the car to the left side of the road since the truck
had occupied the other lane.‘’It was on Saturday evening, after a
fruitless search on the other side, that they decided to go to the other
side of the river and that was where they located the taxi under the
bridge and pulled it out,” he said.