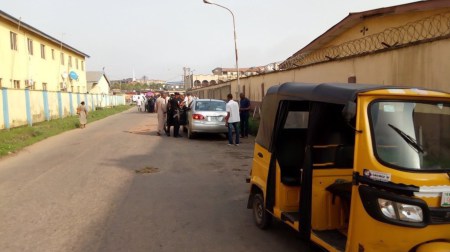 Scene of the incident
The Federal Road Safety Corps spokesman, Bisi Kazeem has debunked reports that a man who allegedly died alongside a purported housewife in a car in Ogba, Lagos, was an FRSC employee.

Speaking in a statement on Thursday described the reports as “falsehood, blackmail or deliberate attempt to continually attribute anything negative to the Corps”.
He said the reports were an attempt to denigrate the good image and rising profile of the Corps.
The statement read in part, “Some media outfits deemed it fit
to inquire and got the clarification that the deceased was a tout that
hobnobbed with the Motor Vehicle Administration office in Ojodu office
where the Corps cohabits with Vehicle Inspection Office, Motor Vehicle
Administration, Lagos State Traffic Management Authority among other
Government agencies.
“It was therefore surprising that some online platforms and
bloggers still claimed that the deceased was an FRSC staff. We wish to
categorically state here unequivocally that the deceased was never an
FRSC staff.

“We demand that clarifications be made in such cases before rushing to the Press.

“The corporate image of the FRSC is very important to the Corps
Marshal, Boboye Oyeyemi, who is striving hard to leave behind a legacy
of disciplined and morally upright organisation.”