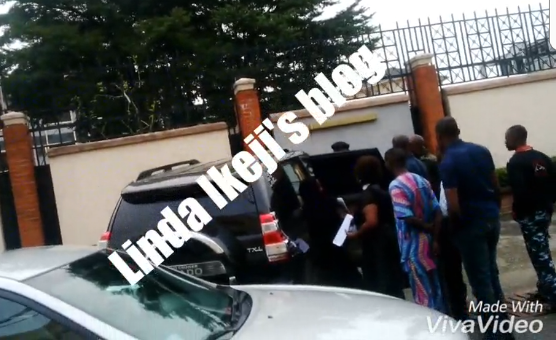 LIB on Thursday of this week reported that one of the sons of former Vice President Atiku Abubakar, and his ex-wife, Miss Bolori fought over custody of their eight-year-old daughter, Amirah.
According to LIB, they were not allowed to capture some of the brouhaha, however they were able to reach out to Miss Ummi Bukar Bolori.

When LIB reached out to Miss Ummi Bukar Bolori, she reportedly said…

‘We have been married for like five years and we got divorced 6-years ago. My kids have been with me for a period of two years since after we divorce, but after they went for holidays at his place he refused to bring them back.

‘Since then I’ve been struggling to get them back. Even when I had my second child, I went through pressure. I gave birth to him through an operation, he wasn’t there for me, it was only me and my family.’

‘I almost lost my life at that time, now they are denying my right as a mother to see my kids, even when I want to see them it has to be under Police supervision.  Whenever I come to see them on Holidays, Police will have to be there, even in the car and everywhere. He always claims he’s protecting his kids but that’s a lie he’s protecting them from me.’

‘That’s the same thing he did when he came, he picked the kids for holidays and never returned them. So he’s scared I want to do the same thing.’

‘He told the DPO at the Police divisional headquarters in Ikoyi that his father told me that I shouldn’t go to court that we should sort the issue between ourselves, because it took my father and his a long while to build their name, so we the kids shouldn’t drag their names.’

‘But if an old man, a responsible man speaks, he would do the act he says he would do. Ever since we sat down and talked and I withdrew the case it became another story entirely.’

‘When they were sure I have withdrawn the case nobody was answering my call. I sent Atiku Abubakar a mail like two times, telling him I don’t see my kids. He told me that the best thing for me is to go back to his son, because his son told him that he wants me back in his house. I said no, that I can’t go back because he’s very rude and arrogant to me.’

‘I’m not worshiping money, it’s my happiness I want. Because I moved out of the house, they don’t have to punish me and my kids, they belong to me and him and to himself alone.’

‘He has a son in London, why didn’t go there to carry him, because he knows in London there’s a law and he must abide by it.’

‘He has broken the law by refusing to go to court and when the court order says they should provide the kids he turned out at the school premises and didn’t move anywhere, he kept on gathering Policemen.’

‘It just the power and that was what he used for me at the beginning. They told me that if I fight I will never win. Even Atiku crowd told me that even if I put it out in court they’ll support their Oga’s son and will give money to the court because they have the power.”We had for long reached an agreement that we have to share custody. He has the children for holidays, while I have them during school time and I still have that on record and it was signed by all of us.’

On why he left her husband, she said: ‘Because he’s not responsible, he wasn’t there, he was never a responsible person. You should know how this big men children do when you get married to them, they feel they have everything and even now he still feels like that.

When LIB asked if there was a case of domestic violence when they were still married, she replied: ‘‘What will I say?’ She asked adding that’ Will I say yes or no to that. I don’t know. But he pushed me when I was pregnant; he pushed me to a stool close to a glass in our room. If had fallen down, only God knows what would have happened.’

‘When I got married to him, his family members were feeling too big, they talk more luxury life to the kids than reality, you travel to London, go to Dubai and Paris. Most times they threaten the kids by telling them they will not see their mother and to some extent, they even barred the nanny from taking my calls so that my kids won’t talk to me.’

‘He wants his present wife to take care of my kids so that they can forget about me, when am not on drugs neither am I a mad person. He should go and try that with the mother of his son in London if he can get away with it.’

‘He had that child out of wedlock and I didn’t know about it when I got married to him. He can’t separate that child from her mother because of the law there.’

‘He’s rude to the court here in Nigeria, he repeatedly told me that no court cannot take his kids from him. Even the Police are with him. The Police that accompanied me to the school to pick my kids all joined him because they heard he’s Atiku Abubakar’s son.’