A middle -aged man slumped and died, while queuing up to get the
yellow card at the international wing of the Murtala Muhammed Airport,
Lagos, on Monday.

The incident happened when the new Minister of Aviation, Mr Osita Chidoka, was on tour of the Lagos Airport for the first time.

The tour had to be diverted to another area because of panic
obviously as a result of the hype the outbreak of Ebola virus had
created.

Some staff and passengers fled the scene
following the man’s collapse, as they feared he was infected with the
deadly Ebola Virus Disease.

Confirming the death of the middle-aged man who, until his death, was
a Nigerian  residing in Accra, Ghana, the General Manager, Corporate
Communications, FAAN, Yakubu Dati, in a statement said  “the passenger,
Mr Osei, took ill on Saturday, August 9 and started stooling. When the
situation got worse, he called his doctor in Accra, who instructed him
to return to Ghana immediately for further treatment. 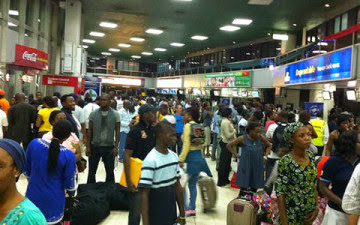 “During boarding formalities for his return trip to Accra, at the
international terminal of MMA, Mr Osei, who had obviously become weak at
this time, was subjected to Ebola virus test by port health officials,
the result of which was negative.

“No further attention was paid to him after his Ebola virus result
read negative, but the passenger later slumped and died around the port
health office.

“This release is necessary to forestall the possible dissemination of
unfounded and misleading media reports on the unfortunate incident.”