The
President of the Nigerian Veterinary Medical Association has disclosed
on Thursday in Abuja that a dog would be honoured with an award on the
World Veterinary Day billed for April 29. 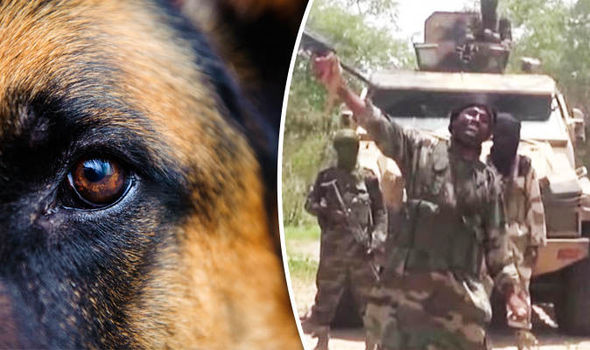 Dog wins award for stopping boko haram suicide bomber
The Nigerian Veterinary Medical Association (NVMA) says it will
bestow posthumous award on the dog that voided mass killing by a female
suicide bomber in Borno.
Dr Godwin Abonyi, President of the association, told the News
Agency of Nigeria (NAN) on Thursday in Abuja that the dog would be
awarded on the World Veterinary Day (WVD) billed for April 29.
Abonyi, who identified the name of the male dog owned by Mr Mallum,
a school teacher, described the dog as a gallant dog for dying in the
course of saving the lives of large number of Nigerians from a suicide
bomber.

“High point of the WVD will be a posthumous award given to the
sacrificial male dog which recently saved mass killings by a suicide
bomber which intercepted the bomber approaching a public gathering.

“In the course of dragging, the dog detonated the bomb and died with the suicide bomber away from the public,” Abonyi said.
NAN recalls that the suicide bomber had on April 2 attempted to
enter into a wedding ceremony ground in Belbelu community in Jere Local
Government Area to detonate the bomb, but was attacked by the dog.
The bomb detonated and killed the dog and the bomber in the course of the dragging.
Abonyi identified part of the award to include buying a prized dog
for the owner and as well give him logistic support to feed the dog for a
year, incentives like plaque of honour for gallantry and supreme
sacrifice.
The WVD is initiated by the World Veterinary Association (WVA) and
World Association of Animal Health, and mark globally annually on April
29.
The day is aimed at highlighting and promoting the different work performed by veterinarians all over the world.
It is also to raise awareness on their contribution to improve animal health and welfare as well as public health.
The theme of this year celebration is “Antimicrobial resistance: From awareness to action”.
Abonyi noted that the theme is to highlight growing incidences of anti-microbials in humans and animals.
The theme also highlights the grave consequences and need for all to act immediately to forestall the menace and save humanity.
breaking news Naija news news now News Today nigeria news
Share. Facebook Twitter Pinterest LinkedIn Tumblr WhatsApp Email
Previous Article23-year-old woman marries her 62-year-old husband (photos)
Next Article Actor Ernest Obi is presently burying his mum in Anambra (photos)