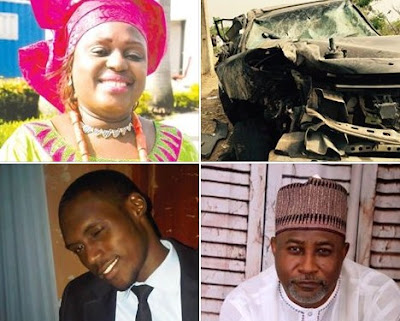 The Minister of State for
Labour and Productivity, James Ocholi (SAN); his wife, Blessing; and
son, Joshua, on Sunday died in a road crash along the Abuja-Kaduna
Expressway, 57 kilometres to their Kaduna destination.

It was
learnt that the Sport Utility Vehicle in which the family travelled in,
had a burst tyre on the highway, leading to the crash.

Ocholi and
his third child were said to have died on the spot after the Prado-Jeep
had a burst tyre in the rear and somersaulted several times.

The impact was so bad that the minister’s SUV ran into other vehicles in his convoy.


His critically injured wife died at the Doka Government Hospital, Kaduna, around 4pm on Sunday.

The
driver and aide de camp, who were also rushed to the clinic, were later
brought to the National Hospital, Abuja at 7.45pm for treatment.

The
Kaduna State Sector Commander of the Federal Road Safety Commission,
Mr. Francis Udoma, said the accident occurred about 57 kilometres away
from Kaduna.

Udoma confirmed that the minister and the son died
on the spot, adding that some aides to the late minister also sustained
injuries.

The news of the minister’s death was first broken by his counterpart for Aviation, Hadi Sirika.

He
said on his twitter handle, “It is too heavy for me to bear the loss of
my dear friend, Minister of State, James Ocholi, SAN. We departed on
Friday to meet no more.”

Tears flowed uncontrollably among
friends, lawyers, chieftains of the APC and relatives as the corpses of
Mr Ocholi, his wife Blessing and son Joshua were brought to the National
Hospital, Abuja, by FRSC.

That of his wife was brought in about one hour, thirty minutes later.

Senior
government officials, who were on the ground at the Hospital when the
vehicles arrived, were seen in groups discussing the incident in hushed
tones.

President Muhammadu Buhari expressed shock and sadness at the death of Ocholi, his wife and son.

In
a statement on Sunday, Buhari described the death of the minister’s as
untimely, regretting that Nigeria had lost a key component of the change
agenda.

“Barrister Ocholi was an accomplished and patriotic
Nigerian, who was keen to accept the call to service at a time his
country needed him,” Buhari said.

He said in the few months he
had been in office, the late minister of state had already begun to
distinguish himself through his commitment and dedication to his
portfolio.

The late Ocholi had a long record of political association with Buhari.

Buhari
also condoled with the government and people of Kogi State, which he
described as having lost a distinguished and irreplaceable son.

He prayed that God would comfort them and grant them the grace to bear the loss.

Buhari
also sent the Secretary to the Government of the Federation, Mr. David
Babachir, to formally convey the news to members of the deceased family
as well as parishioners in his place of worship.

Speaking with
journalists at the National Hospital premises, Babachir stated that the
three family members were killed in the crash at about 3pm.

He
said, “I will like to confirm that at about 3pm today (Sunday), the
Minister of State for Labour, James Ocholi (SAN), was involved in a
motor accident along the Kaduna-Abuja road. In this accident, the
minister lost his life, his son also lost his life, and the wife also
lost her life.

“It is a very sad day indeed for Nigeria as this
has never happened and President Buhari is in shock; all members of the
Federal Executive Council are in shock and indeed all Nigerians are in
shock.

“Personally, I have known Ocholi for more than 20 years;
we have been friends, both in politics and in Christian service. I am
indeed personally saddened by this and cannot begin to express the grief
that we all face.

“Now the bodies have been recovered and
deposited in the mortuary and we are waiting for the immediate family
and the government for the next line of action. May God comfort all of
us Nigerians.” 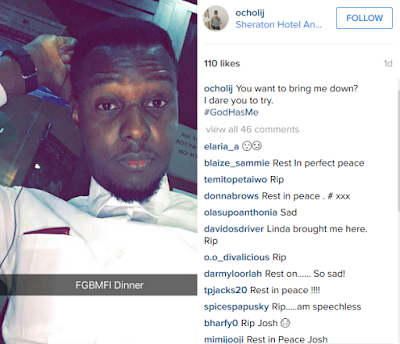 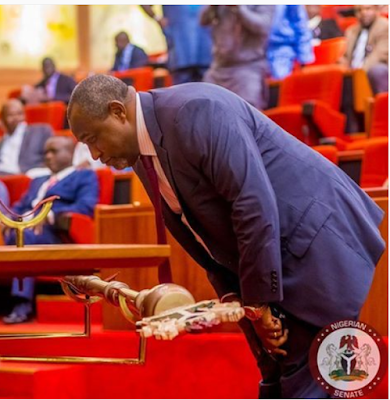