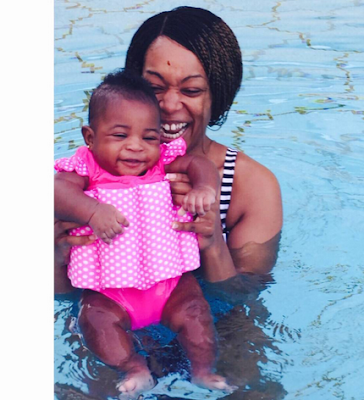 You may recall that on Sunday pop star, Davido released what he said was test results showing that his baby mama Sophia Momodu had tested positive for cannabis, which he claims she infected their baby with causing her to have health issues.

Well Sophia and her cousin Dele Momodu who has been
embroiled in this messy child custody/abduction drama maintained their
silence following the release of the test results…until lasr night.

The Ovation Publisher took to his Instagram page where he published the above photo of baby Imade Adeleke and her aunt Ashley Coco Adeleke
(who is Davido’s sister and who was stopped on Wednesday Dec, 30 from
leaving Nigeria with the baby whom she told allegedly told customs
officials at the Murtala Muhammed airport was her child.

Read what he wrote below:

The newspapers were awash this morning and the social media has been on fire since yesterday. My cousin SOPHIE MOMODU was comprehensively scandalised. Even a Laboratory result alleging she’s a cannabis smoker was splashed everywhere. She was said to have infected her own baby with cannabis.

The vicious authors expected some gullible people to believe them. Nothing could have been cruellest. Our initial reaction was to maintain the ceasefire but this latest attack against a defenceless lady who merely asked that she be allowed to enjoy the fruit of motherhood was the limit of recklessness and rascality….

All sensible human beings should abhor and condemn this unwarranted fabrication of endless lies just to justify the act of forcefully detaching a baby from her biological mother. Check this picture well.
That’s baby Imade with her aunt Ashley Adeleke who took her to Dubai a few months ago against her mother’s consent. The world has been told that the baby was so sick that she needed urgent medical attention in Dubai. Imade’s mother was deprived of attending personally to her own baby.

Now wait for this; just imagine you’re the hapless mum of Imade; instead of receiving regular medical briefs from Ashley the Good Samaritan, you receive pictures of your own baby swimming with Ashley Coco inside the heavenly pool of Atlantis, The Palm Dubai, one of the most luxurious resorts in the world while anxiety is killing you back home.

Baby Imade has been forcefully separated from her mum since July 11!, 2015, when she was barely two months old. We’ve pleaded for months with the Adelekes to return the baby to her real mum. Sophie was allowed to visit her daughter once a week every Sunday inside Dr Adeleke’s guest quarters. We did not fight. We did not engage in social media wars. They said our family was too poor and beneath their status. We did not mind. They said Sophie was a gold-digger, we did not respond. We only kicked when Baby Imade was to be taken out again without the mum’s necessary consent. No one asked them to take Sophie along. We only tried to stop the impunity and dehumanisation of a poor mother. We acted within the ambit of the law. No more. 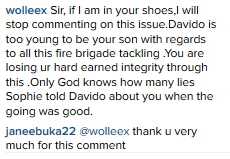 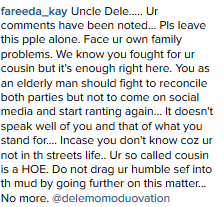 One Fareed Kay wrote thus “Uncle Dele….. Ur comments have been noted… Pls leave this pple alone. Face ur own family problems. We know you fought for ur cousin but it’s enough right here. You as an elderly man should fight to reconcile both parties but not to come on social media and start ranting again… It doesn’t speak well of you and that of what you stand for…. Incase you don’t know coz ur not in th streets life.. Ur so called cousin is a HOE. Do not drag ur humble sef into th mud by going further on this matter… No more. @delemomoduovation”

Another Wolex wrote “Sir, if I am in your shoes,I will stop commenting on this issue.Davido is too young to be your son with regards to all this fire brigade tackling .You are losing ur hard earned integrity through this .Only God knows how many lies Sophie told Davido about you when the going was good.”

One Abimbola Akanake also wrote “With due respect sir @delemomoduovation
u re a great man we use to know pls don’t let one stupid girl dat has
painted u red in d presence of davido when d good was still going pls
don’t let her tarnish ur image sir bcos she doesn’t have good record
after all she’s not ur daughter u only trying to help her as a cousin
(SOPHIA IS LIKE OMO OSAN TON KO PONPON BA IYA E) , bcos before i was
blaming davido before as a mother bcos every mother will think their
cheating on Sophia in beginning of dis matter , but am saying it n I wil
keep saying it Sophia does not have home training, for crying out loud
she’s old enough to own a home if a lady of her age can’t even bath a
little girl she is a shameless mother she ruine her life with her bare
hand . All she knows is to live fake life d money she does not work
for, imagine her ! 300k per month still demanding for increment
requested for dat huge amount t per month n big car while her daughter
still on sick bed who does dat all in d name of fake life she wants to
be known everywhere davido’s baby mama clubbing, smoking using big big
gadget re u trying to do trade by barter ? or u re using ur baby to
generate money from Davido wht a shame is dat a life? with all d money
she has been collecting she can’t even afford a ticket to dubai for her
daughter’s treatment still waiting for davido to buy it .i am very
sure if davido bought her dat car n give her d money she requested for
nobody I repeat nobody would hear her voice . U better let dem take care
of her for you before u regret ur life in future bcos by d time u will
graduate from d street u can still sit bck on something n stop dis ur
beautiful lies . Hmmm despite d fact day dey re both smokers but as
for davido I rest my case for now ,( in yoruba proverb) dey said OHUN TO
YENI LO YENI OKUN ORUN KO ADIYE Sophia is a shameless mother to a
motherhood @officiada“

OmoArewa wrote thus “My primary concern is what if Davido and Sophie settle this matter within them selves they might later put Mr Dele into middle….yoruba said, oro oko ati iyawo ko se da si!!! No matter what both of them will still come together trust me!!!!!”