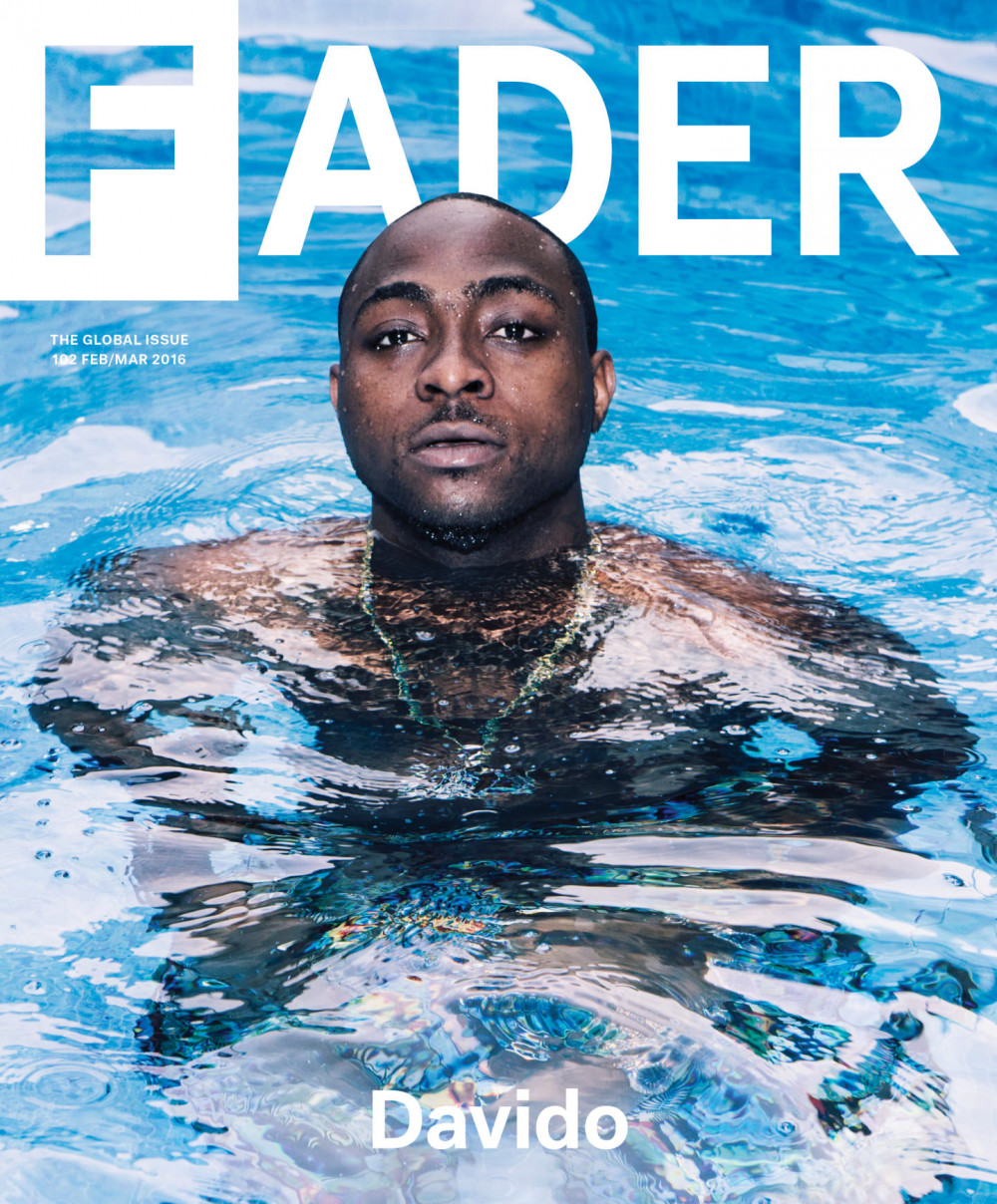 Davido recently covered the global issue of Fader Magazine, and the feature on him was titled“How Davido Became African Pop Music’s Fortunate Son”.
Here are some highlights from the feature.
On Davido’s House
For the past three years, Davido, now 23, has lived in the posh Lagos
neighborhood of Lekki, in a three-story house that welcomes a revolving
cast of employees, friends, and hangers-on, with imported weed and
liquor in constant supply and demand. 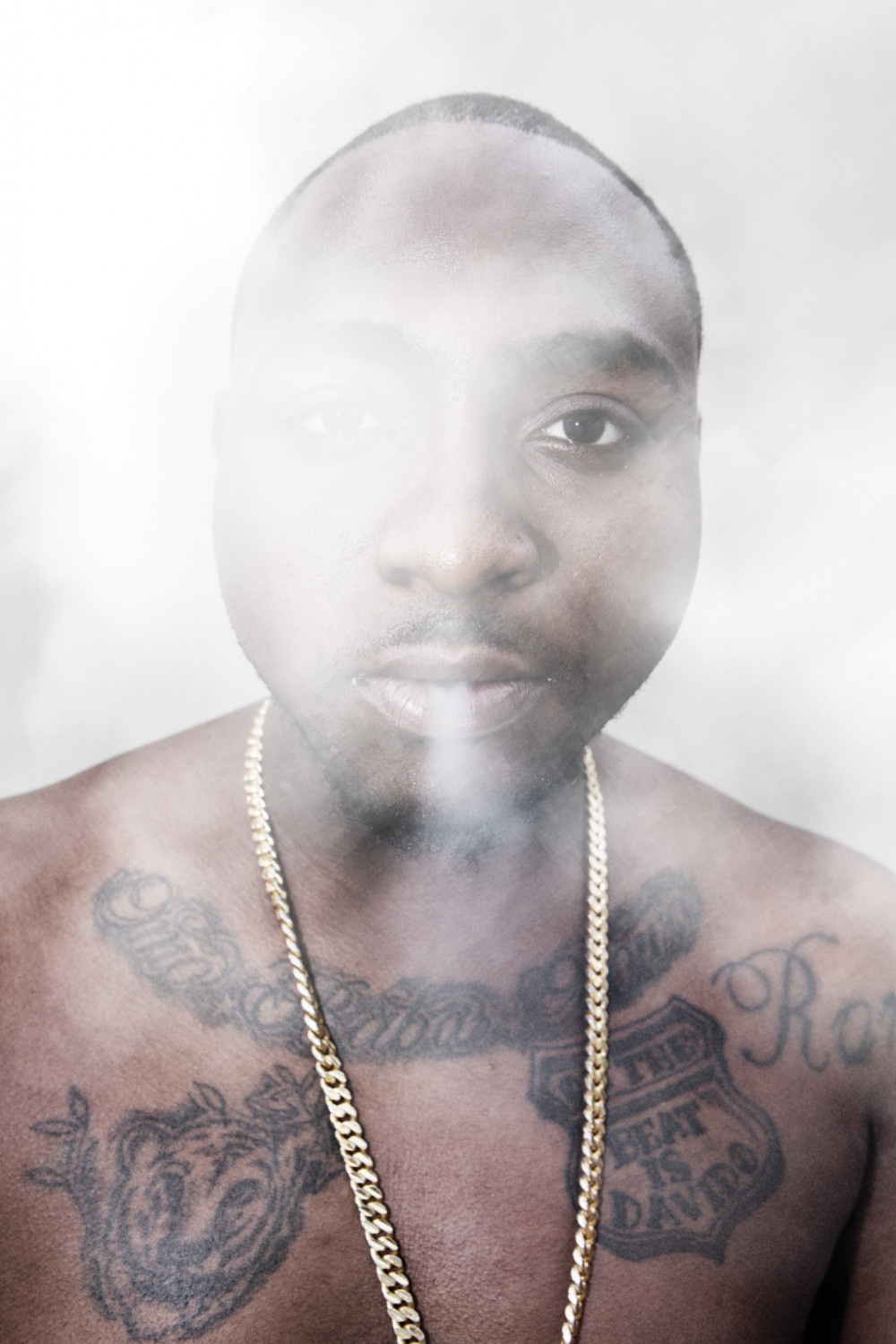 On a Friday afternoon in December, he’s sitting on a couch in the
home’s top-floor lounge, telling his life story to an audience of a
half-dozen people.
At Davido’s house, the walls are
dominated by portraits of Davido. Most of the pieces, including a
five-foot tall Old Masters-style painting, have been painted by fans,
who camp outside for as many as three days, waiting for Davido to accept
their offerings.
On His Family House
Davido’s childhood home is just a few minutes’ drive away. Inside,
there’s a grand marble staircase, and family photos spanning several
generations line the walls of multiple living rooms. (Davido’s
godfather, it should be noted, is Aliko Dangote, a construction magnate
whose estimated $18 billion net worth has earned him Forbes’ title of
Africa’s richest man for the past three years.)
On Atlanta Police Raiding His Home, Paid for in Cash
“I guess a neighbor must have tried to snitch. They saw me and
thought, ‘How did that African get here?’” he says. “How do I explain to
someone who’s never heard of me that I’m famous? I showed them all of
my videos on YouTube. They loved it.”
The Fame
For Davido, the result has been a kind of fame for which there are few parallels. When I land at Murtala Muhammad International Airport
in Lagos to report this story and discover I don’t have the necessary
yellow fever vaccination document required for entry, I successfully
drop his name, much to the delight of a middle-aged official who asks me
to pass on a message. “God bless our son, Davido,” he says.
A couple of days later, Davido performs
at the wedding reception of family friends in Lekki’s Lagos Oriental
Hotel. His five-song set was offered to the newlyweds by a family member
as an ostentatious gift, much like the brand-new Bentley on display
elsewhere in the hotel’s ballroom. Afterwards, he attempts to snake out
of the hotel through a makeshift exit, his oblong face streaked with
sweat.
Dozens of young men crowd the wings of
the ballroom, undeterred by the armed soldier who is a member of
Davido’s everyday security detail. Waiters drop their serving trays for a
chance to touch him. Bartenders and ushers abandon their posts. Palms
are thrown to faces, temples, and the sky in disbelief. But the wilder
the scrum grows, the calmer Davido seems; similar scenes manifest nearly
anytime he appears in public, and he’s accustomed to the hysteria. “Sometimes they want money, sometimes they want photos, but sometimes I think they just want me to see them,” he tells me later. 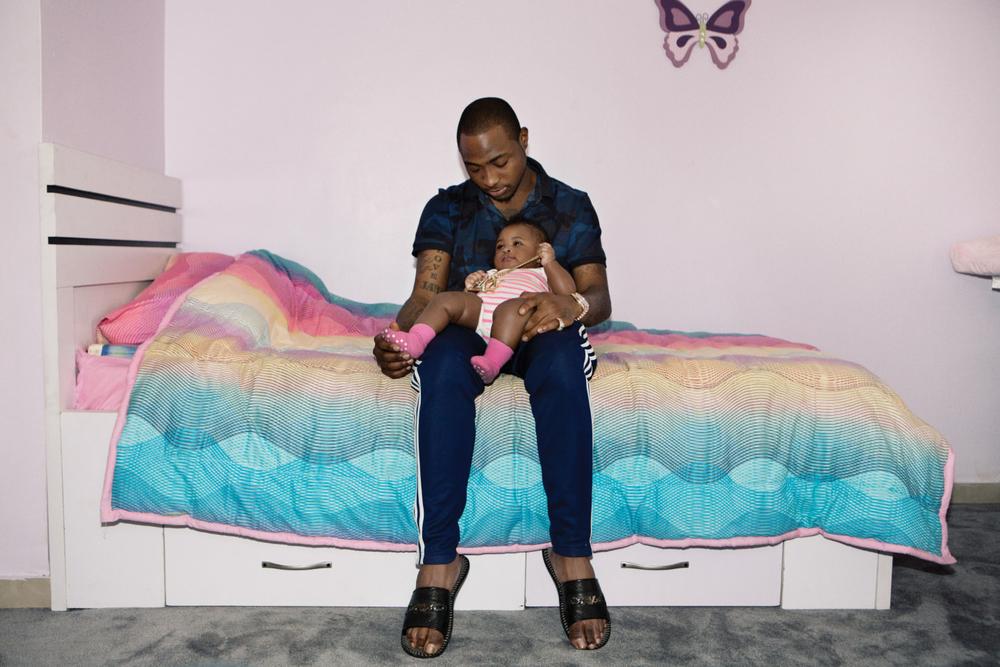 The Future – On Going International with Sony
The Sony deal, which was brokered in part by Nigerian-born, U.S.-based A&R Efe Ogbeni,
will provide him with new resources to reach American and European
fans. Davido envisions snagging an opening spot on a prime U.S. tour, a
big push for a crossover single, and other traditional major-label
marketing. Baddest will feature non-African artists—Future
will appear on at least one song, Davido says—and strike an overall
balance between Nigerian pop and American-inspired hip-hop. “I know
what kind of songs work. The music should have everything in
it—Jamaican, African, American, everything. Something like Wizkid’s
‘Ojuelegba,’ it has a cool feel to it,” he says, nodding to the song remixed by Drake and Skepta in 2015. “But are foreigners going to come to Nigeria to listen to that all the time? No. It has to have a pop influence.”

Davido thinks he will triumph where others have struggled because of
his innate cultural literacy of both the U.S. and Africa, the result of
being raised between worlds. Long before the internet erased them for
the rest of us, money and travel erased borders for him. “I can be in the club with Meek Mill and Future and be on a level with them,” he says. “I
understand what they’re talking about. I know what the trap is. These
are things that some of these other guys, they don’t have it. They can’t
have these conversations with the rappers, so how can they have them
with the fans?”