It appears that the  marriage of popular on-air personality, Freeze is heading for the rocks.

According to a report by Yes International Magazine, the Cool FM
presenter, Ifedayo Olarinde, allegedly abandoned his wife and university
sweetheart, Ope for an older lover and a mother of four, who is said to
be based in Port Harcourt, Rivers State.

Sources close to the father of two, reportedly told the magazine that
some of his friends have waded into the matter urging him to return to
his family and mend fences with his wife, but to no avail.

And truly, Freeze who doesn’t hide his love for expensive wrist watches has not
talked about his wife in a long time now – he posts photos of his kids
on his social media page but skips out his wife.

Reacting to the report, however, Freeze in a phone conversation said… 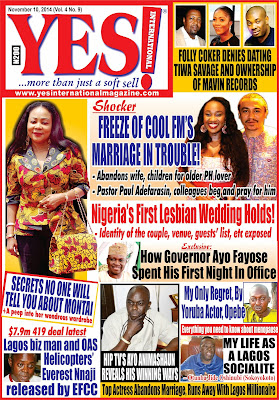 “You called to ask about the challenges in my marriage? Do you have
work? Common! Why can’t you talk about national issues? I think you
should concern yourself more as a fellow journalist on finding out where
the girls are. That’s Bring Back Our Girls. Go and face that one. There
is nothing wrong. Okay! Everything is okay. Alright! I don’t discuss my
family as a matter of principle. Good or bad, I do not discuss my
family. Thank you”.