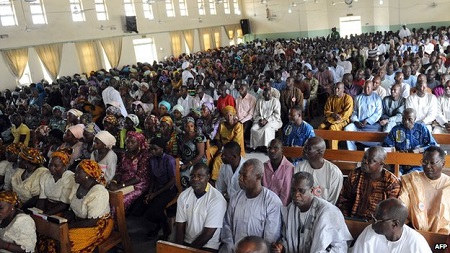 File photo: People in church
Mrs. Ese Kalu, a woman, who is a member of a Pentecostal Church
along Cemetery road in Sapele, Delta State, left members of the church
shell-shocked after she collapsed and died during a mid – week service
at the Church premises on Tuesday night.
A report by Vanguard has shown that the
deceased, a petty trader, was said to have attended church services
that evening, full of life and was leading the congregation in praise
singing when she suddenly fell down, clutching her chest.
A lady who claimed to be the late woman’s relative told Vanguard that she had no medical history.

“Ese went to church around 7pm. she was singing when she
suddenly stopped and clutched her chest, before going down. Church
members who took her to the hospital came back crying, they said she
died before they could get to the Clinic” the source who craved anonymity said.
When Vanguard visited the deceased home, her husband who was in tears, described her as a pillar, saying “her death is still a shock to me” as he added amidst tears.
Her remains have been deposited in the Sapele Central Hospital.