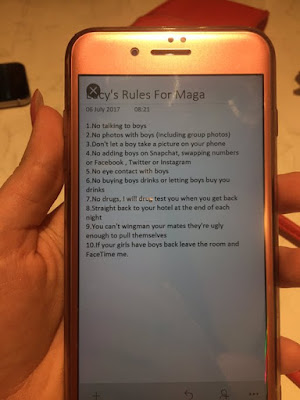 20-year-old Josh Utting, served his 18-year-old girlfriend Lucy a ‘rule book’ because he was jealous. Although he ended up cheating on her. See photo after cut…

U.K Mirror reports that Josh further claimed when he sent it to her, Lucy agreed to the rules and said they seemed fair enough as long as he stuck to the same things when he was on holiday.

Lucy said: “We were seeing each other for about 5/6 months then stopped due to him sleeping with others girls while seeing me.
“Then we were going to try again because he told me he was in love with me – he made the rules for us to both stick to while on holiday.”..She went on to say that she stuck to the rules and he slept with four girls in a week.