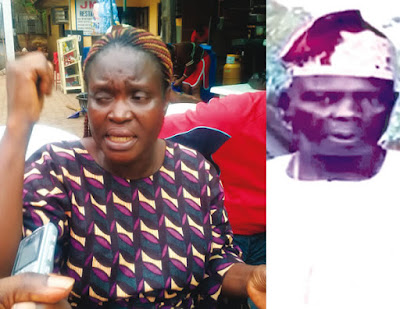 Nekpen, the blind wife of Jeff Obasohan,
has insisted that the allegation that her husband set their landlord
ablaze is false. Obasohan had been accused of setting his landlord, Pa
Joseph Iyen, ablaze on Uwa Street, in Oredo Local Government Area of Edo
State.
The incident reportedly occurred on
Wednesday at the residence of the deceased.
Punch newspaper gathered that there had been a protracted quarrel between the late landlord and Obasohan over his unpaid rent.
The 83-year-old landlord was said to
have died after sustaining severe burns while Obasohan, also known as
One Love, was arrested by policemen from the Esigie Police Division.
Sources from the victim’s family had
said that the late Pa Iyen had also given the suspect a quit notice on
two occasions, because he (Jeff) allegedly refused to pay his rent.
The wife of the deceased, Esther, had alleged that the tenant had threatened her life and that of her late husband.

“He does not pay his house rent; he does
not pay the light bill. Since 2014, we said he should leave this house,
I don’t want trouble.
“He threatened to kill me or my husband.
We took him to court. Then, my husband fell sick. Later, they said that
the case had been struck out,” the widow had said.

But the blind wife of the suspect,
Nekpen, said her family, including her husband, was asleep when they
were alerted by the screams of some neighbours to a fire outbreak that
affected two doors leading to their apartment.

She said, “I am blind. I was sleeping
with my children in one room at about 4am. The next thing I heard was
people shouting in the backyard, ‘Fire! Fire is burning at One Love’s
(Obasohan) side! Open the door!’ So, we, including my husband, woke up.
“We ran to the kitchen, but the heat
from the fire was coming into our house. It was after some tenants at
the backyard put out the fire at the back door that we were able to come
out.“When we asked our
neigbours what happened, they said that they did not know and that they
only saw the fire. As we came out, one boy passed us; he said he wanted
to ease himself.

“When he got outside, he saw that
Edionwan was burning on the ground. People started shouting. So, we
locked the gate so that nobody would go out. When the police came, they
told us to open the door. They brought us out and took my husband to
Esigie Police Station.”

When asked if she knew how the landlord
caught fire, the blind woman said,

“I was inside the house. How will I
know? It was the shouts of the tenants that made us to know that our
front and back doors were burning. I beg the government to look into the
case.”

The elder brother to the suspect, who
identified himself as Tony, said that he alerted the police when he was
informed of the fire incident, alleging that the deceased landlord had
intended to set Jeff and his family ablaze.

Tony said, “I was the one that called
the police. The boy (Obasohan) is my younger brother. I called Esigie
(police station). I called the control room. The police went there two
times and said that there was nothing like that.
“But I told them that there was a dead
man in that house. I told them to go again before they succeeded in
bringing my brother out. The man (the deceased) wanted to burn my
brother and the family.”

She said, “Last month, the landlord
called to tell me that my son should leave his house. I begged for time
to enable him to search for a house but he refused.”