Aww! I Called Don Jazzy And He Picked Up Immediately –– D’Banj 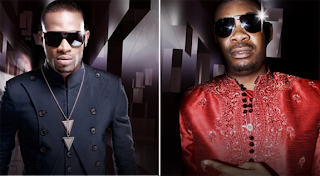 In a recent interview with Soundcity, D’banj had this to say about his relationship with Don Jazzy…

Stressing that there is no quarrel, the Kokomaster said: “Don Jazzy
produced four songs on the DKM album coming out soon. I remember when I
was in America and they were mastering a song and I heard the one
featuring Fally Ipupa which was produced by Don Jazzy and I was like
wow! I called him immediately and he picked up. I said listen to what
I’m hearing, this is a music you produced. So don’t get it twisted like I
said, love is a beautiful thing.

“I’m a businessman and I do what is right for my business. What I’m
doing now is what I have always wanted as an artiste, professionalism
and good distribution. I don’t have any regret.”