This is so funny…Airport officials in LA recently seized and destroyed a consignment of 67
live African snails sent from Nigeria to a resident in the US, saying
the snails are poisonous and highly destructive.

The snail consignment arrived in the States from Nigeria on July 1st in a blue baskets. 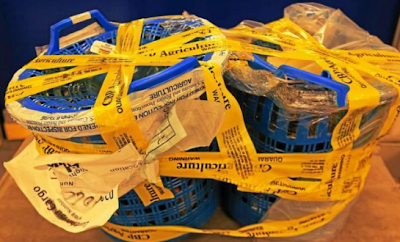 According to the U.S. Department of Agriculture, the snails are
prohibited because they can carry parasites that are harmful to humans,
including one that can lead to meningitis. They also say it can destroy
local crops.

Maveeda Mirza, the U.S Customs and Border Protection  program manager
say they are investigating why an individual would want to consume such
an amount of deadly snails. She said;

“We’re investigating what happened, but it doesn’t seem like there was
smuggling involved. When someone doesn’t know a commodity is prohibited
under USDA regulations there is usually no punishment.”

What the owner of the snails should have done is maybe smoked and packed
the thing well in newspaper wrappings. Anyway, RIP to the innocent snails.  Forgive those Airport officials oh kingdom of snails. Let these murders be wiped off their record in the Book Of Life…lol!