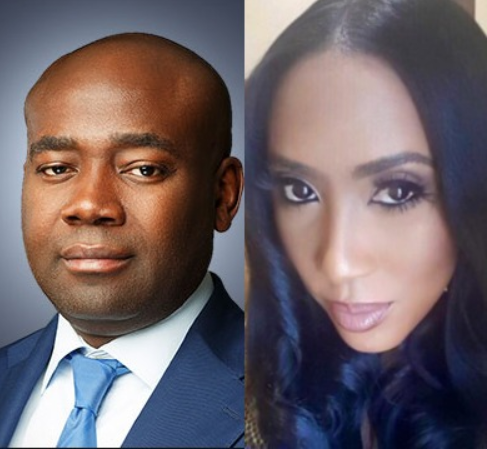 Bliss activated in Aig Imohkuede’s heart
in unexpected hours, like the enchanted spell sailing in with the wind
to animate a loveless heart. It enshrouded his heart soon immediately he
stepped into the soft, blissful glades of the smiles and endearing
warmth of his newfound love.

To Aig, love was the proverbial thorn
that pricked his strides, scaring him off the valley of marriage but few
years till he clocks 50, Aig has found his bride thus dismissing fears
by friends and family that he might end up an ‘eternal bachelor.’ Aig
has found that ethereal maiden in her flower whose love presumably
trumps a hundred coat-of-arms and the love of a pining mob of damsels.
While his friends and family agonised
over his perpetual bachelorhood, Aig surprised them with the only woman
with whom he would walk down the aisle: Funke Fowler.
The latter, who is the daughter of the
Federal Inland Revenue boss and former Lagos tax Czar, Tunde Fowler, has
also found love in Aig, soon after she bled and stung from an ill-fated
marriage to ex-husband, Abbey Kuku.
It is noteworthy that Funke is the
Executive Director at Coronation Bank, a fashion enterprise, where
Nigerian billionaire, Tunde Folawiyo, is the Chairman and she has
unlocked the soft spaces in her heart for the wild, intoxicating thrusts
of Aig’s passionate love.
Aig, like he is fondly called by friends
and associates, is the younger and very quiet brother of the former
MD/CEO of Access Bank PLC, in the person of Aigboje Aig-Imohkuede.
At the moment, Aig and Fowler’s story
reads like a passionate verse in a treatise of love. The intrigues and
realities inspire such rare passion that has become a reference point
for experienced and budding romantics alike among their coterie of
friends, relatives and other loved ones.
Findings revealed that, barring any interference, the two lovebirds are set to tie the knots in a few months.
For Aig, it would be his first sojourn into the meadows of wedlock but
for Funke, it would be her second attempt at finding bliss and living it
within the folds of matrimony.
While no marriage is an easy grind,
let’s hope they are blessed with the cosmic gift of resilient love. That
perfect love that survives the test of time.