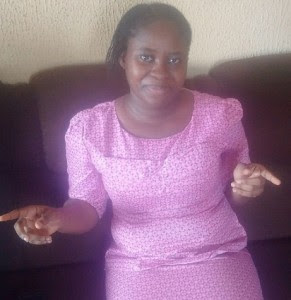 After spending 16 years in pursuit of a university degree at four different universities within and outside Nigeria, one Mrs. Oluwamayo Ojumah has  finally emerged with a First Class degree in Biochemistry at the University of Lagos.
Interestingly, making a First Class degree, did not come accidental to her, it was a decision taken
after several failed attempts at studying medicine and under the care of her pastor father, Mr. Johnson Ajibade, and her husband, Mr. Felix Ojumah, who is a Petroleum Engineer.

Feeling  Saturday Vanguard in on the experience that saw her going from Ago Iwoye, United Kingdom, Okada, Lagos and nearly to Saint Kitts in the Americas for a university degree that was largely elusive for 16 years, she exclaimed;

Continuing, the obviously excited Ojumah, who recently had her convocation at the University of Lagos, UNILAG, flashed back recalling how her wasted years in pursuit of the degree paid off with a Cumulative Grade Point Average ,CGPA, of 4.51. Expounding this at her home in Lagos, she said:

‘’I left secondary school in 2004 and in that same year I got admission into Olabisi Onabanjo University ,OOU,   for Applied Zoology and the agreement was that if I performed well they were going to transfer me to Medicine.

I had wanted to study Medicine. I didn’t really get the scope of the course, so I was not doing well. I think I left in 200 levels. So my parents said I should go abroad and study Medicine. Unfortunately it was quite expensive and I didn’t   want to get them   into those strains of providing that kind of finance every year. So, we reached an agreement to come back home and go to Igbinedion University, Okada. That was in 2009.

I went to the UK and came back. In the UK they were not ready to admit me to read Medicine.   I needed to do a lot of courses before and then thinking about the financial implications I had to come back home. Since Igbenedion was better and they said they were going to allow me read Medicine, I came back home.

Ordinarily, many would opt out at this time, but Ojumah embraced the options that came her way.

‘’The option was either to repeat the class, take a transcript and go abroad either to Ukraine or to Saint Kits in the Americas,” she stated.

Considering that it would be less burdensome financially for her comfortable parents, she opted to go to Saint Kitts, an Island in the Americas formerly known as Saint Christopher.

‘’It was not as expensive like going to the UK. And just within that period while processing the passport; I had a little problem with immigration. It took a little while. Unfortunately, by the time I got my passport, the border had been closed. Unfortunately, my mother passed away in March 2011 and I couldn’t go abroad any more.

They wanted me to go and I told them that it did not make sense going abroad again. The only option was to go to University of Lagos. Now that was the fourth time of starting all over again and I did not want to sit for JAMB. The only option was to do the foundation programme from 2011 to 2012 after which I took Direct Entry into 200 levels.”

Narrating her experience at UNILAG, she said the disposition of her lecturers and students towards her were not outside the ordinary.

The Biochemistry lecturers of the University of Lagos are okay. They gave their best.   At least I have been to other institutions and know the kind of things other students go through. My supervisor Dr. Lawal was supportive. The day I knew he was proud of me was the day he said I was graduating with a First Class. And when they discovered that I was married, I had a better relationship,” she added.

Asked if there were exceptional methods applied to achieve the feat, she said:

I didn’t just depend on class notes. I used Youtube and downloaded most things that had been taught from Youtube and I read a lot. I can read from 8pm to 6am. My husband was also supportive because I used to watch movies a lot but he ensured that I did not fail to read because of movies.

The summary of it all is that God saw me through. I think God just wanted to honour me. I did a lot of work. People are talking about me that I came out with a First Class after all I have been through. It feels great. I already knew I was going to get First Class in October when the results came out. I think I have been in shock until the day of graduation. I just don’t believe that this is me. I am not a genius. Some think I read a lot. People don’t remember my past stories, but I have a cause to thank God.”

On his part, her husband, Mr.Ojumah, explained that he ensured she didn’t lose sight of the fact that getting a First Class was a project.

It is actually great. For me it is like a dream come true. After we got married, my father in-law told me that I should make sure she comes out with a First Class.  I called her to ask what it will take to get that. Looking at it, I just felt it is possible, that is why each time she comes to say she was tired I will tell her she is wasting her time.

I know there had been times when she felt we should drop the idea of First Class and settle for a 2.1 but I felt she was wasting her time. That is why I had to stop her from watching movie. Even when I will be watching a movie by the time she comes back I will stop. I felt we had a goal and must meet that goal.

One of the easiest ways to get to our goal was to stay focused. During examinations, I often told her to relax while I do the cooking. For me, it is like a dream come true. I never knew that people will find it inspiring because to so many it is like a challenge that having gone through all these, a married woman came out with a First Class.

We are happy that people, who feel that they can’t make it would find it encouraging. I just want to bless God for being there for us. The lesson for people is to stay focused and remain determined in spite of difficulties. Sometimes I had to keep her awake just to read not because I had examination to sit for. There is need for people to utilise any opportunity at their disposal to actualise their goal.”