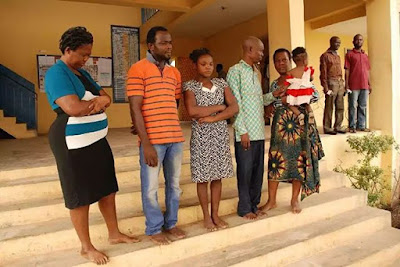 Tessy Obianua, was arrested in Ondo State, for allegedly selling her baby girl for N500,000 to Mr. And Mrs. Sunday Kalu who reside in Onitsha, Anambra state, after falling victim of a specialized child trafficker, Mrs. Chibuzor Okoye, who convinced her to sell the baby to the couple.

After much pressure she confessed to one of her uncles that she sold the baby to a couple in Onitsha. Police investigation later revealed that Tessy was lured to Onitsha by her father’s neighbour, Jude Azuka, who took her to Okoye who in turn helped her nurse her pregnancy until she delivered.

Okoye was arrested at No. 3, Tonny Olisa street Awada in Onitsha. It was Okoye, who sold the baby to the couple at No. 8, Uzogwu street Onitsha. She then gave Jude the sum of N200,000 out of which Jude bought clothes and shoes for Tessy and also gave her N30,000.