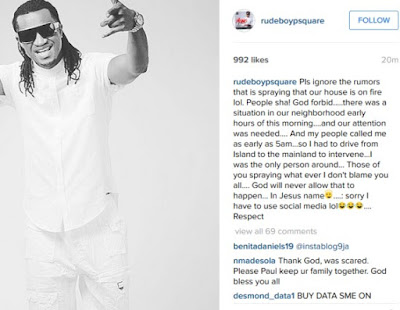 Earlier, it was reported that the police has locked up P’Square mansion in Omole estate for defrauding someone who paid them heavily for a show, some other reports say the house was on fire.

Well, Paul Okoye has cleared the issue, he was the only one that went to the house, there was no fire.
Pls ignore the rumors that is spreading that our house is on fire lol. People sha! God forbid…..there was a situation in our neighborhood early hours of this morning….and our attention was needed…. And my people called me as early as 5am…so I had to drive from Island to the mainland to intervene…I was the only person around… Those of you spreading what ever I don’t blame you all…. God will never allow that to happen… In Jesus name?….: sorry I have to use social media lol???…. Respect

Did you know the Aso Villa security officials always beg for money from ‘important dignitaries’?!
After fan called Henshaw Kate ugly, the actress goes for a make over (look)
To Top