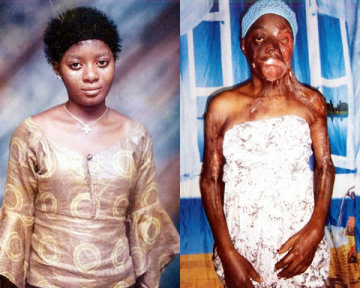 One Afusat Jimoh who fell into boiling
oil seven years ago, has narrated her sad story to Punch below:

At the time, she was helping an aunt living in the Ejigbo area of
Lagos State to fry some pieces of meat when she suddenly had epileptic convulsion and fell into the sizzling oil.

While battling with the burns she sustained in the incident, her
six-month-old child fell ill and died, followed by the death of her
husband.

Punch Metro learnt that after many years of trying to find solutions to her woes, her mother also abandoned her and fled.

The Lagos State Government, which promised to foot the bills for a face-lift surgery, was said to have defaulted on its pledge.It was learnt that Afusat now begs for alms in order to raise funds for her surgery.

Punch Metro visited Ijeshatedo Street in the Surulere area of Lagos,
where the Kwara State indigene resides with an uncle, Abdullahi
Ayinla.She had a veil on her body with which she covered her injuries.

“I was helping my aunt to fry some pieces of meats. There was nobody at
home that day and I didn’t know when I felt dizzy and unconsciously
fell into the hot oil that I was using to fry the meat.“People came late to my rescue, by which time the oil had damaged my face, arm and neck.”

Afusat said she was rushed to a nearby hospital, where she spent four
months before being transferred to the Burns Unit of the Lagos State University Teaching Hospital, Ikeja.While the hospital doctors were battling to restore her health, her baby, Fatai, died.

UFC 261: Nigeria’s Kamaru Usman knocks out Masvidal in 2nd round to retain title

“My child died because I could not breastfeed
him. After his death, my husband was no longer coming to the hospital
to check on me and that gave me some concerns. After several months, we
decided to look for him at their family house. I was told that he had
died and his family did not want to compound my woes, which was why they
left me in the dark.

“Right now, I also don’t know where my mother is. She has left me for years and I have lost all contacts with her. The only person I have around me now is my uncle and my old father who visits once in a while.
‘’I was selling ready-made clothes, but people were afraid of
patronising me because of my looks. This was why I started begging to
complement the little my uncle provides.’’

It was learnt that the family’s efforts to raise funds for her to undergo a surgery, had not yielded any result.

A document, purportedly issued by an Indian medical facility in Mumbai,
Wockhardt Hospitals, dated July 2012, showed that the cost of the
surgery was N3m, excluding her cost of travel.

A non-governmental organisation, Dot Human Development, was said to have
written the Lagos State Governor, Babatunde Fashola, requesting support
for the victim.

The state’s Ministry of Health, in another letter by the then Permanent
Secretary, Dr. Femi Olugbile, directed LASUTH management to do the
surgery free of charge.

“Afusat accidentally fell into boiling oil during an epileptic attack
six years ago. She sustained a third degree burns to the face that
healed with scarring and disfigurement of the face.
“Following a request, she was referred to LASUTH for assessment and
recommendation. The plastic surgeon and the Ophthalmologist both
confirmed that the corrective surgery can be done in LASUTH.
“In view of the above, you are kindly requested to carry out the surgery
on the victim on compassionate ground. Please forward the details of
cost of management to the Ministry of Health for consideration.”

“The initial procedure in this patient will involve the insertion of tissues which will be procured from outside sources.”

The victim’s uncle, Ayinla, said the LASUTH doctors explained to the
family that they needed funds from the state government to procure the
tissue and without it, they would not be able to do anything.

“We started going to the state secretariat to see how they will give the
LASUTH doctors the money, but they kept directing us from one desk to
the other. We were frustrated and we had to leave the hospital,” he
added.

When contacted, the Lagos State Commissioner for Health, Jide Idris, did
not pick his call. A text message sent to his phone had also yet to be
replied to as of the time of filing this report.

Anna Banner is not pregnant after all, hasn’t had ‘sex’ in a long while
Bride abandons fiancé on wedding day because he’s not a graduate
To Top