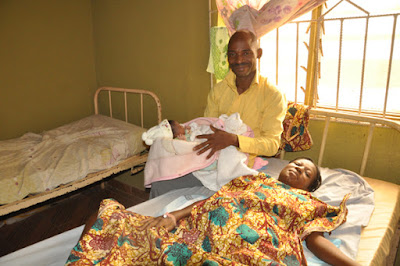 There was shock and amazement in Ikugbomire in Obafemi Owode Local Government Area, Ogun State, on
Wednesday as a woman was delivered of a baby from a pregnancy she had
carried for four years. People trooped to Alayo
Vantage Hospital from far and near for a glimpse of the miracle baby.According to the Natin newpaper, before she was delivered of the baby, the happy mother had become the
butt of taunts and ridicule in the community, particularly after a scan
conducted on her protruding tummy indicated that all she had in it was
fibroid.

The arrival of the baby therefore marked the end of years of anxiety
for 33-year-old Oluwabunmi and her 42-year-old husband, Bankole Ogidan.
According to her husband,
Bankole Ogidan, their wedding took place on August 27, 2011.

“We were
full of hope about having children and raising a complete family. But we
had to wait till August 2013 before she got pregnant exactly two years
after,” he said.

“We went for pregnancy test and it was confirmed positive. A few days
after, my wife complained that she was feeling pains in her womb. We
went to a midwife who told us that the pain was not a problem; that the
pregnancy was intact. I was not satisfied, so I took her to another
hospital (name withheld) where we did a scan but the doctor said he
didn’t see any pregnancy. The doctor said there had been a miscarriage. I
asked him that shouldn’t there be an outflow of blood if she had a
miscarriage? The doctor said yes. I told him that we had not witnessed
anything like that and he was shocked.

Scared by the doctor’s pronouncement, Bankole ran to the pastor of
his church, Prophet Emmanuel Ogbara, who assured him that God had told
him the pregnancy was intact. A couple of weeks later, Ogidan went back
with his wife to the hospital but they were told that what she had in
her womb was fibroid. They left for the General Hospital, Gbagada, where
they were asked to see a gynaecologist. Again, the gynaecologist told
them that what he saw in Oluwabunmi’s stomach was multiple fibroid with
no chance of conception.

“All this while, my wife’s menstruation had ceased,” Bankole said.
“It was only once after the pregnancy was sighted that we observed that
little blood came out but stopped almost immediately. We left there for
the Government Hospital in Owode, Ogun State.

“Thereafter, we returned for a scan session. The gynaecologist said
there were three sets of fibroid where the baby ought to be, but that
the way my wife looked, she appeared like a woman who was ready for
delivery. He said he would act fast and do an x-ray that would reveal
more. That was on March 25, 2014.“We did the x-ray but we were told that though they believed in God,
from all medical indications, there was no more pregnancy in the womb.
They said the uterus was elongated, blocked with a concentration of
urine fibroid and the white fallopian tube was outlined. They concluded
that it was fibroid. I asked if she could get pregnant and they said
no.”

Meanwhile, Oluwabunmi’s stomach had protruded as if she was due for
delivery. People whispered wherever she passed in the neighbourhood and
her story was used for jokes. Bankole said he could not even think of
sleeping with his wife because of the delicate nature of her condition
all through the period.

“There was pressure from all corners—family, friends and
well-wishers—who all had their suggestions as to the solution. Some said
we were hearing wrongly from God,” he said.

Asked if he was not afraid that his wife would die in the process of
waiting for a baby, he said:

“I did not worry about death at all. I was
only more inspired to wait on God. As a matter of fact, we stopped going
for medical opinion. As far as we were concerned, they had no good news
for us, so we resorted to our church and prayer.

“On the 10th of September, 2015, my wife became terribly ill with
signs of labour. I had to look for any hospital in sight because her
condition was bad. That was how we got to this hospital.

“After giving her the initial treatment, we were told to go for
another scan. To the glory of God, the doctor here said he had seen a
baby; that my wife was carrying four months pregnancy.”

But the mystery again was how the pregnancy could be four months old
when he was not making love to his wife, and his wife’s protruding
stomach was there for all to see?

“At the church, the prophet confirmed again that the child had all
along been there; only that scan could not pick it. So the hospital
continued to nurture the baby for antenatal. But here again, they still
saw fibroid in the womb. But to the glory of God 27th January this year,
our baby finally arrived,” Bankole said.

But that was not all. After some time, the baby was said to have “got lost” in the womb.

“We had to do an operation. When we did,
we found that contrary to scan reports, we met a different thing in the
womb. It was a sac with pus inside. It was not fibroid. And looking
inside, we didn’t see any baby. But I remembered that I used to hear
sound inside Mrs Ogidan’s womb, so the doctor searched further; the baby
was  hidden in the uterus.

According to Dr Sam Akinyemi, a consultant on naturopathic
gynaecologist,

“This is an abnormal medical record. But nothing is
impossible in this world. All homo sapiens must take note of that.

“It is the joy of every pregnant woman that at 40 weeks or before
then, the woman must fall into labour. When it does not happen, it
becomes a major concern to the physician and the patient herself.

“In natural medical gynaecology, we have had cases of that nature. It
can be the result of retardation in hormonal production in the pregnant
patient or mother. And metaphysically, nature won’t seize to amaze us
in its power.”