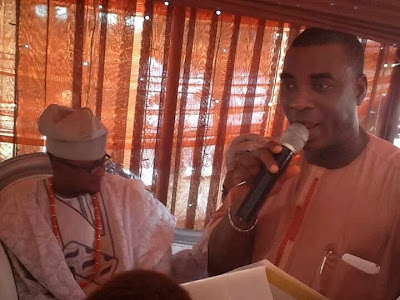 The entertainment
giant who clocked 57 on Monday, March 3, 2014, couldn’t forget in a
hurry the joy of the day he was born.  According to the successful
musician, March 3, 2014, was a very significant day in the history of
his life as he was born 57 years ago, and in 1957.
The birthday was
celebrated in a fun filled atmosphere at his Ule Ojusagbola, GRA, Ijebu,
Ogun State palatial residence.  Not only that, the fuji maestro also
gave the hands of three of his beautiful daughters out in marriage.
They are Idayat, Ameenat and Sekinat who got married on March 4, 6 and
9, 2014 respectively.
In this interview with Encomium, Kwam 1 speaks on the weddings, his wealth and so much more.


How happy are you celebrating 57?

Looking back 10 years ago, what were the things you’re doing then that you can’t do again?

So many things.  Even the way you react to situations, your
utterances and everything you do must be very different because 57 is
not just one age by the corner.  It’s a big milestone.  And you wouldn’t
like to see yourself as a failure.  If you’re unable to pack yourself
together at 57, then you’re as good as a goner.

What would you say is your greatest achievement at 57?

A lot of great achievements.  Basically, the Almighty God has been
able to see me through the present situation I am in my musical career.
Anytime I see the younger ones referring to me as Baba, I ask myself,
‘what is it exactly?’  And the guy referring to me as Baba is just 32
which is obvious I have his age mates among my children.  So, if he
refers to me as ‘Baba’, basically he knows what he is saying.  To me,
that’s the greatest achievement.  Also, if your relevance is still very
much potent, it’s a great achievement.  And I enjoy the very best of
health.  I am not diabetic, I am not hypertensive.  So many ailments a
lot of people may be battling for 10 years, I thank God I am a healthy
person.  Except the situation of 2009 when I had to go for the
correction of my lungs, which was successful.  I also saw it as a very
big achievement because many people had the same thing but they were
unable to tell their stories themselves.

What’s the best way to attain success and sustain it because
not everybody that starts it well is able to go far, what’s the secret?

Definitely, you get to understand every step that you take and judge
it yourself.  That will lead you to the next step you’re going to take.
If you take a wrong step, definitely you know you have to correct it in
your next move.  If you have taken the right step, you know that you
have to sustain it.  So, it is called checks and balances.  You don’t
act like a hero or a super human being.  There is no super human being
anywhere.  If you’re able to look at every step taken, everything you
lay your hands on and you make a critical assessment of them and you
identify where you’re to make necessary correction and you do it, you
will be a super hero.

A lot of people believe K1 is very rich, can you tell us how rich you are?

I don’t know what people mean by being rich.  If living comfortably
and setting certain standards for yourself is what people refer to as
being rich, then I am glad I am one. In terms of liquid cash, I have a
job that could fetch me whatever amount I may need within the short
moment.  And on a long term, I have repertoire that can fetch me a lot
of returns.  And I am still very much in contention.  Promoters of music
still find my door step a place they could invest a huge amount.  So,
it continues like that.  Not about the amount I have in my account.  I
have set a standard of living for myself and I am enjoying it.

How do you feel giving the hands of three of your daughters out in marriage almost at the same time?

I feel great.  I am happy and fulfilled.  I feel extremely joyful and
great. I am so happy because it coincided with an unforgettable date,
the date that probably comes once in one’s life time.  3-3-57 can’t come
twice. I was born on March 3, 1957, which is 57 years ago.  I gave out
three of my daughters’ hands in marriage.  That has been a very
fantastic record so far. It’s a thing of joy.  Idayat, who is a
councilor at Lagos East Local Government was the first to wed on
Tuesday, March 4, 2014 followed by Ameenat on Thursday, March 6.  Then,
Sekinat rounded it off on Sunday, March 9, 2014. They are all
graduates.  I trained them very well. I am very happy about that.

You planned it that way or it was just a coincidence?

Honestly, it wasn’t planned that way.  We’re only planning one, then
the second person said she was ready as well.  Then, the third also said
she was ready.  I was expecting the third daughter to say no but she
said she was also ready.  May be, they all felt like so far this man has
time now, why don’t we do everything at the same time,  And the truth
is that if we didn’t do everything now, my busy schedule would overtake
them.  I don’t know when next we could have done all the weddings.
Election is coming up in Ekiti very soon, the same thing in Osun.  It’s
very obvious that I will be very much busy.  By the time we’re out of
that, we’re moving up to very many other states for the campaign for
general elections.  I am connected to so many things here and there.  I
will also travel out of the country on a musical tour.  I may probably
not have chance until maybe the end of 2015.

How many children do you have?

Whatever the number of children I may have, I have a lot of graduates
among my children. Whatever it is, I am overjoyed about them because I
have been able to do to my children what probably many people don’t
expect a musician could have done for his children. I know many of Chief
Ebenezer Obey’s children that are well read, I know many of King Sunny
Ade’s children that attended good schools and so on.  So, I am glad to
be among those musicians that have tried for their children in terms of
education.  So, no matter the number of children I have, I thank God I
have been able to send them to good schools.  They attend some of the
very best schools, home and abroad.  But unfortunately, not that my
parents didn’t want to send me to school but I lost my dad when that
opportunity could have been there for me. And I can’t blame God for what
happened.  It wasn’t my father that was tired of life and killed
himself. He never wanted to run away from his responsibilities.  But I
thank God, I have been able to do better things for myself.  I have been
able to speak to you people in a language that many people feel it’s
only when you go to school that you can learn that.  If I do not have a
university certificate, the truth of it is that I am okay.  And I am
grateful to God for the little I have been able to put together for
myself.  Show me your friends, I tell you who you are.

You’re very close to your mother, what’s the greatest lesson she has taught you?

My mother has taught me a lot of lessons.  If you see us laughing,
holding each other that doesn’t stop her from scolding me if I do
something wrong.  If I do anything that’ not nice, she has to make an
expression.  That’s what I like about my mother.  She may not raise a
stick to hit me but she will talk to me in a way that I will feel proud
that it’s my mother that’s correcting me. If I can’t listen to her, who
else do I listen to?  Very many people might be looking at my hand going
into my pocket perhaps to give them something.  When they want to say
something derogatory, they may not say it again because they don’t want
to see me remove my hand from my pocket.  For my mother, if I have the
money and I refuse to give her, it’s a curse on me.  Whatever I do to
her now is exactly what my children will do to me. That’s where the law
of Karma comes in.