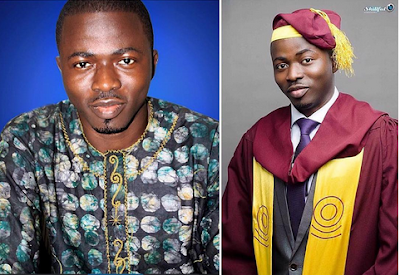 More encomiums poured in on Tuesday for the Psychology graduate of
the University of Lagos, Mr. Ayodele Dada, who broke the institution’s
academic record.

Dada obtained a Cumulative Grade Point Average of 5.00 to emerge the best graduate in the history of the 54-year-old university.

Among
those who hailed the 29-year-old Ekiti State-born scholar were the
Pro-Chancellor and Chairman of the Governing Council of the university,
Prof. Jerry Gana; Vice-Chancellor, Prof. Rahamon Bello, and the
President of the institution’s alumni association, Dr. Sunny Kuku.

They
spoke on Tuesday during the first segment of the 2014/2015 convocation
ceremonies. No fewer than 2,585 persons graduated on the occasion, with
66 of them obtaining First Class.

Nigeria is in a war zone - Soyinka

The graduands from Arts,
Education, Environmental Sciences, Sciences and Social Sciences are
among the 10,907 persons passing out from the ivory tower this year.

Gana,
who hailed the commitment of the authorities and members of staff of
the university to producing quality graduates, particularly
congratulated Dada on his academic prowess.

The pro-chancellor, a
former Minister of Information, urged the record breaker as well as
other graduates to utilise their knowledge to further lift the country
to loftier heights.

Bello, who said Dada had set a record for
others to meet, promised that the university would continue to maintain
the tradition of producing quality graduates that could compete with
their counterparts from across the world.

Kuku, who offered
N500, 000 to Dada on behalf of the alumni association, said his feat was
the height of academic excellence in the university.

Dada, whose every move to the rostrum received a thunderous ovation from the audience, said he was not a genius.

He
said, “I do not have to be a genius to get the results of a genius. I
believe every one can achieve whatever they want to achieve in life. The
best way to serve God is through excellence in whatever we do.

“However,
we all cannot be doctors, engineers, pharmacists, among others. So to
my colleagues, I urge them to remain steadfast in their various
undertakings in life.”

Earlier,
the VC had commended President Muhammadu Buhari, who is the Visitor to
the university, for fighting corruption and terrorism in the country.

Bello
added, “We salute the President’s courage and urge him to continue
unabated until the two issues are completely wiped out.”

He promised that the university would support the government’s efforts through research and advisory roles.