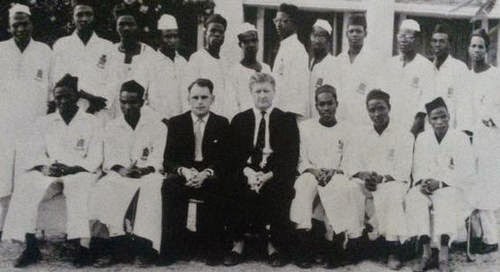 Two prominent Nigerians that the presidential candidate of the All
Progressives Congress (APC), Gen Muhammadu Buhari, mentioned as his
classmates in secondary school – former president of the Court of Appeal
(PCA), Justice Umaru Abdullahi and former inspector-general of police,
Alhaji Ibrahim Cooomassie – last night spoke on the personality of
Buhari.
In an exclusive interview with LEADERSHIP in Abuja, Umaru
Abdullahi and Coomassie told said that they and about five
prominent Nigerians attended the same school.

Coomasie said Buhari was the head boy and loved to play football during their days in school.

Coomassie said: “While we were in
school, Buhari was the head boy. He loves playing football. We were all
close friends in school. After we finished secondary school, General
Buhari decided to join the military, I joined the police and Justice
Abdullahi decided to go to the university.”

“I, the late Shehu
Yar’Adua, the late Halilu, a Grand Khadi in Katsina, Senator Abdul Ali, a
Senator in the 2nd Republic and several other attended the same school”

The
controversy over whether or not the presidential flag bearer of All
Progressives Congress (APC), General Muhammadu Buhari (rtd) sat and
obtained the school leaving certificate may have been put to rest as his
former school confirmed custody of his result.

The principal of
the school told our correspondent that Buhari obtained the
WASC/Cambridge University Exams certificate in 1961, adding that the
school had released his result yesterday, in line with general’s
request.

“One Prof Haruna Kaita wrote to the school on behalf of
General Muhamnadu Buhari, demanding his result and we have since
released it to the said professor.”

The principal showed our correspondent a copy of the result but said he would not release it without a formal request.

Although
the management of LEADERSHIP promptly wrote to the school, efforts by
our correspondent to get a certified copy of the result from the school
did not yield a positive result.

Why we cleared Buhari to contest- APC Screening Chair

Against
the backdrop of the raging controversy over Buhari’s academic records,
the head of the APC presidential screening panel, Chief Ogbonnaya Onu,
has explained why the party’s presidential candidate was cleared to vie
for the office of president in the forthcoming February 14 election.

Onu,
who is one of the leaders of the party, told journalists in Abuja
yesterday that members of the panel adhered strictly to the provisions
of the constitution to clear Buhari.

“Really, that issue
shouldn’t create the kind of problem that we are seeing today in the
polity. When this matter came before us in the presidential screening
committee, we had to rely on the constitution of our great country.

“To
qualify to be president of Nigeria, you have to be a Nigerian by birth;
you have to be 40 years of age; you have to be a member of a political
party and that political party must be registered, should sponsor you
and finally you should obtain education at least up to secondary school
level or equivalent, and our presidential candidate has attended
military schools in Nigeria, in India, in the United Kingdom (UK) and in
the United States of America (USA).

“And in America, he attended
the US Army War College. So, there isn’t any reason whatsoever to
create this type of problems that we now have in the polity,” Onu said.

Asked
if the panel actually demanded to see a copy of Buhari’s school
certificate during the screening exercise, he said: “No, we demanded it
but there was an affidavit and you know once you swear to an affidavit,
that definitely gives you whatever protection in any matter, not just in
this case. But the thing is that we were not doing this for the
opposition – the PDP, we were doing it for Nigeria. This is a man who
will be president of Nigeria and there is a supreme law, the
constitution, that guided us and the issue of qualification is at least a
school certificate.

“So if there is evidence that somebody has
attended military schools that are tertiary institutions up to the war
college of the USA, I mean why should you really go on about school
certificate and so on? So all those are in his file. So, I really don’t
see why we should be thinking in this direction because the problems
before the nation are enormous. We should be looking at how we can solve
the problems of insecurity and unemployment,” he said.

Jonathan, Buhari are Infidels, Liars, cowards – Shekau swears at them in new video
Awww, Buhari’s daughter, Halima, opens up on the kind of father he is
To Top