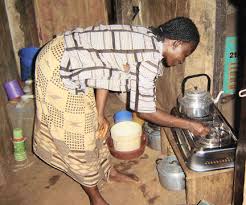 The Director General of the Cross River State Primary Health Care
Development Agency, Dr. Betta Edu was at hand to rescue a set of twins
of about 3 years old, after Kerosene explosion during the Leboku
Festival in Ugep, Yakurr Local Government Area of the state.

The explosion according to Betta Edu was emanated from a cooking
stove when the mother of the twins was trying to prepare Indomie for
them.

The adulterated Kerosene was bought unknowingly by the mother of
the 2 boys during the peak of the popular Leboku New Yam Festival.

Narrating the story to Calabar Reporters, Edu said; “This was how
everything conspired to keep me away from the world renowned LEBOKU
FESTIVAL AGAIN!!!

“Why do I have this feeling that as I wake up and pray to God to
direct my path, he just directs me straight to people who have real
problems instead of where people are making money hmm!

“OK, for whatever reason I decided to take a street I never use to
take… And there was this mother rolling on the ground, in the middle of
the road (I almost ran over her) calling on God for help! Of course
there was a crowd of wailers, sand flying in the air everywhere, soapy
water flying from all angles and two small boys emerging from the crowd,
white; sand on their heads; looking like ghost with their skin dripping
off their body. It immediately dawned on me that my day was about to
take another dimension (my Leboku dancing gone).

“Well, your guess is as good as mine, that was how the drama started!
A poor mother who had no food to give the children went across the road
to borrow kerosene and indomie to prepare for her small boys
(Abasifreke & Abasikanke). She got home emptied the kerosene from
bottle into the stove, by this time the hungry twin boys were all over
her crying for food. Just one strike of the match stick and an explosion
occurred she couldn’t see her sons again… All she saw was fire running
(her twin boys covered in fire). She alerted God who she acknowledged
saved the boys even when they were born prematurely at 7 months. She
called her neighbours and the crowd came to her rescue to stop the
flames.

Summarising the story, the DG said, “I had to carry the wailing
highly devastated mother, some neighbours and the Two boys to the
hospital and do the needful!”

She also warn those dealers who put petrol into kerosene because it
is cheaper, since they want to make quick money. “God is watching, the
blood of the innocent people you kill daily will surely cry out to God.
Your greed will consume you!” Betta Edu said.

Currently, the boys and their mum are in the University of Calabar
Teaching Hospital (UCTH), where they are receiving treatment. Thanks to
Betta Edu, who’s taken that responsibility upon her shoulders.