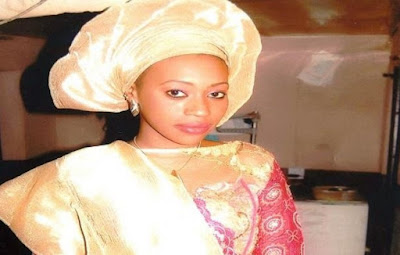 My heart bleeds as I type this!

Late Aisha Isa Fagge was a new bride, with
a 12-day-old marriage, when she was brutally murdered by yet-to-be
identified person(s) in August 2015. Five months after the shocking
incident, circumstance that led to her death still remain very
controversial.

20yrs old Aisha was killed in her matrimonial home in Sharada Ja’en
Quarters, Kano, found in her sitting room around 1:00pm when most
residents in the area had gone for congregational Juma’at prayers.

Alhaji Nura Muhammad, the deceased’s husband told police that he found
her lifeless body in the sitting room, with both of her hands tied with a
rope.

He explained that he had spoken with her on the phone around 10:00am and
everything seemed fine, so when he got home and knocked on the door and
got no response, he became worried.

“A neighbour, Rabi’u Abdulkadir, joined me and we broke down the door, and entered the house to find Aisha dead,” he narrated.

But the incident has been riddled with various and varying versions…
While police say the murder was carried out by rapists, the victim’s
family insists the murder was purely ritual. A family source told Daily
Trust that the women who performed the cleansing ritual on late Aisha’s
corpse did not see any signs of r*pe. “She
was found fully-clothed with no sign of struggle or assault. Only her
husband, Nura, can shed true light, as he was the first person on the
murder scene,” said the source.

But Police Public Relations Officer (PPRO), DSP Magaji Musa Majia said: “Late Aisha was found dead, nude with her two hands tied with a rope, suggesting that she was r*ped before [she was] killed.”

He said police had during investigation discovered some bloodstains and
Fluid on Abdulzahir Muhammad Saminu, one of the two suspects arrested.
Saminu is the groom’s friend, while the other suspect is Rabi’u
Abdulkadir, a neighbor.”

The suspects were later arraigned before a Shari’ah court at
Rijiyar-Lemo for a two-count charge of conspiracy and murder contrary to
sections 221 and 145 of Kano State Shari’ah Law 2000.

In a twist, when the case came up last Monday for continuation, the
deceased’s husband Nura Muhammad, was also arrested on the premises of
the court as requested by the prosecution counsel, Barrister Lamido Abba
Soron-Dinki. “We have strong evidence that Nura had a hand in the murder of late Aisha,” he said.

Soron-Dinki said three more witnesses will testify during the next court session.

Confirming the arrest, the PPRO DSP Majia, said Nura is being interrogated at the command’s CID.

Earlier during the court session, Nura Muhammad as first prosecution
witness, told the court that all he knew was that the two accused
persons Saminu and Abdulkadir went to his house and his late wife
informed them that he (Nura) was not around. However, while being taken
to a vehicle parked at the premises of the court, Muhammad told newsmen:
“Even if one of the two accused persons
is my friend does not mean I am party to the murder of my late wife. Why
on earth would I kill my own wife?”

Alhaji Isa Fagge, late Aisha’s father, told Daily Trust on the phone
that he was shocked by his daughter’s death, news of which he got while
at work when his son Aminu called him. “I’ve left everything to God. I have lost her and she will never come back again.” He added that since the police have taken over the case, he hopes justice will prevail.

Residents of the area who spoke to Daily Trust, expressing concern. One
of them, Ibrahim Muhammad, said: “We hope the police get the actual
killers,” he said. Another resident, Abubakar Ashiru, said: “We have
never experienced this kind of incident in this area, so it’s shocking.”

Early morning cuteness: Tiwa Savage calls her son a ‘Miracle
How the RCCG Pastor that was kidnapped during service was freed
To Top