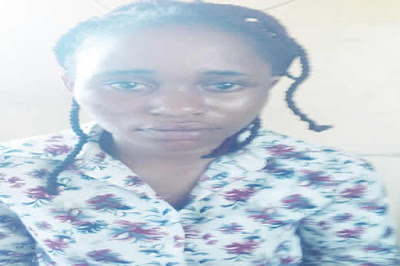 NationalMirror reports that Ogbona, and the deceased identified as Engineer Pius Ezema were neighbours at Number 15 Ondo Street Okobaba in Ebute Metta area of Lagos State but trouble started on March 12th when Pius allegedly quarrelled with Okoro for singing loudly near his window in the “face-me-I -face -you apartment where they lived as next door neighbours.

The quarrel snowballed into a fierce fight which led to biting and eventual death a day after the fight
took place.

Narrating what transpired between her and the deceased, Ogbona denied allegations that she killed her neighbour as she stated that she defended herself from the deceased’s brutal attack. She said:

“I have been living in that house for the past six years with my sister. I am a sales girl at Balogun Market in Lagos Island. On March 12th about 6am, I woke up to pray and I put on my earpiece and turned on my phone music.

I started my morning devotion by praising God. My sister was not around. She had gone to assist one of our sisters to take care of her new baby . I was alone in the room praising God. Sometimes last year ,I used to praise and pray outside our room but my neighbour Pius, warned me not to pray close to his window. I told him I was sorry and since then, I started praying in my room.

I was singing loudly because I was enjoying the morning devotion. All of a sudden, Pius barged into my room. He was shouting and said I refused to take instructions not to disturb him. He held my clothes and started slapping me . I begged him to stop beating me but he continued. He was very mad at me and he locked my door and continued to hit my face . He brought out a whip and used it to flog me all over my body. I was screaming and yelling that he should stop hitting me.

Our neighbours heard my shout for help and they came to my rescue but Pius had locked the door. The other neighbours appealed to him to open the door but he refused. When he had beaten me to his satisfaction, he unlocked the door and left me crying in the room.

The other neighbours came into my room and they asked why Pius beat me. I told them that I was singing loudly and it infuriated him. The neighbours called him into my room and said he should explain why he beat me mercilessly like that but he said I should come out. As soon as I stepped out, Pius descended on me again. This time, he brought out a knife and held my throat.

He wanted to slit my throat. I had to bite him on his thumb so he can release his grip on my neck. It worked and he left me crying. I had to call my boyfriend to help beg him so he wouldn’t beat me again since he refused to listen to the other neighbours. My boyfriend came and begged him and he told him to warn me not to disturb his peace again. That was how we settled the matter that day “

Asked if the deceased had asked her out and she turned him down, Ogbona stated that such romance never occurred between them.

“ Pius is not my boyfriend and he has never asked me out. He has a fiancée and they are planning to get married in July this year. After the beating I received from him that morning , I became too scared to sleep in my room alone. That night, I went to my friend’s house to sleep.

I came back on March 14 , two days after he fought me and I learnt that Pius was dead. I was shocked. I asked our neighbours who killed him? How did he die? . They told me that Pius did not come out of his room the previous day and his brother was worried as he could not reach him on his mobile phone so he decided to check him in his room. The brother knocked and knocked but Pius did not answer. They attempted to break his door but still he did not respond. When they finally forced his door opened, they found him laying face up and foaming from his mouth.

My neighbours told me that I killed Pius with my bite. I was confused. I don’t know what they were talking about. Some neighbours told me to run away but I refused since I know that I did not poison him. The police later came from Denton Police station and arrested me.

They said my teeth is poisonous and caused Pius’ death. I don’t intend to kill Pius. I am a Catholic and I forgave him all he did to me. I want police and government to carry out an autopsy on Pius and they should conduct medical examination on my teeth. I don’t know why I am in this mess but God will see me through”.

I don’t have a relationship with the late doctor’s family | Ibinabo Fiberesima’s shocking story on her journey to prison
The secret love letter that Ese Oruru wrote to her lover/abductor, Yunusa surfaces online
To Top