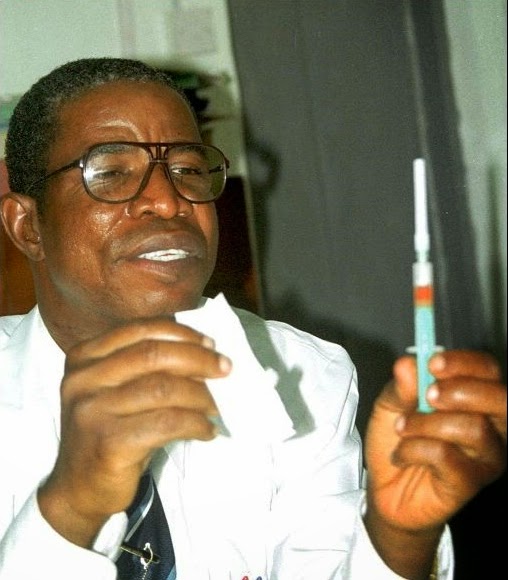 The ban placed by ex-President Olusegun Obasanjo’s administration on
the HIV/AIDS discovered by a surgeon, Jeremiah Abalaka, 16 years ago,
has now been declared illegal, null and void by a federal high court.

Justice Binta Nyako in a 32-page judgment obtained by journalists
during a press briefing by Abalaka on Saturday in Abuja, however, held
that the use of the vaccines must be at the discretion of the patient.
“The government lined up experts recently during Ebola outbreak.
Everything and everyone that could contribute to the battle was brought
on deck and Nigeria was the pride of the world and the people were proud
of the government. HIV/AIDS is also related to Ebola as it is equally a
death penalty on its victims. This should call for encouragement and
not dampening of the spirit of persons who have made efforts to provide a
remedy,” the Judge held.
Oh by the way, Abalaka says he is yet to forgive the former President for the ban placed on his vaccine.
He said, “For me, I think it is a matter of basis; you can forgive
someone or ignore what the person has done. Obasanjo has not apologised
to me? How does forgiveness for him come up? Even if you believe in God
as I do, we confess our sins to God before God forgives us. God is
Almighty; even when we do wrong, we go to God and seek forgiveness.
“Obasanjo has not apologised to me in anyway; so for me, the issue of
forgiveness for Obasanjo is premature and out of place. I can ignore
all he has done and that is the only option available to me.”
Abalaka and his hospital, Medicrest Specialist Hospital Limited,
Gwagwalada, had dragged the Federal Government to court seeking a
declaration that the July 20, 2000 ban or suspension of the use of HIV
vaccine he discovered was illegal, null and void, because it violates
his Patent No. RP 13567 dated July 22, 1999.
Benue State protests against establishing Ruga settlement (Photos)

Pastor Tunde Bakare tells an amazing story of his beautiful moments with Buhari
Aww, Lagosians to get free internet if Agbaje wins
To Top