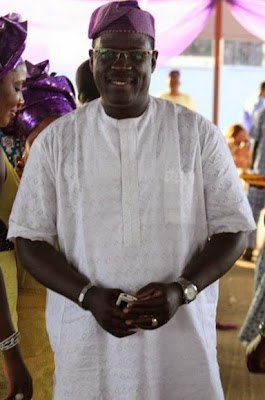 Veteran yoruba movie star, Taiwo Hassan aka Ogogo has fully recovered and gained back his weight which he lost many months ago after battling a strange sickness which almost
took his life.
Today, Taiwo Hassan, popularly known as Ogogo has
bounced back and is doing even better than when he had the unfortunate
break.
After quitting the social scene for a while, the actor was recently spotted at Oga Bello’s daughter wedding. Thank God he is healthy now!
He spoke about the illness in a not-so-recent interview below:

“May such sickness not come near us again…Let me put it as all things come from Allah. At times, you may be
thinking that you are doing the wrong thing and God might say you are
right and verse versa. Everybody has his or her trying period, only that
you won’t know when God will try you. But according to my own faith,
both good and bad cometh from God while the terrestrial powers are also
there to carry out their wicked acts, if you say there is no terrestrial power, you
are deceiving yourself. All you have to do is be prayerful. Throughout
my illness, I did not think negatively, all my thoughts concerning the
outcome of the sickness were positive. I was not the only sick person in
the world at that time but I guess it became celebrated due to the
nature of my job.

During this period, I received series of calls, there was a time a
call came through and the man at the other end asked if I was Ogogo and I
said yes and the man shouted that this Ogogo speaking will not die and
he started praying for me. That person called all the way from
Ado-Ekiti. Even in Lagos, the noise was everywhere that I was dead but I
give God all the glory that all the noise and cries were not over my corpse but they were voices
raised to God for my survival.
A lot of people have often asked why do
women love Ogogo and I always tell them that it depends on the
perspective from which they are looking at it, because as far as I am
concerned, I am loved by both sexes through what I am doing. Whether I
am good or bad at home nobody cares to know, it is what I do on screen
that matters.
A lot of reasons were adduced for your illness; some said it
was cocaine that got bust in your stomach while others said you were
afflicted with the dreaded AIDS disease. What exactly was the nature of
your illness?
I never gave it a thought because I had known that as a celebrity,
lots of reasons would be adduced as to the cause of my illness. Despite
all lies fabricated against Jesus Christ, and even Prophet Mohammed, God
vindicated them, so who am I that people won’t talk about, let them
talk. I have never seen cocaine before in my life, to God who made me.
Or is it a crime for one to travel abroad?
You know there were stories going round that most artistes are being used as courier for drug barons.
I have never seen it before; all I know was that when we go abroad,
our fans do appreciate us. Some will pray for you, some will give you
gifts, some will even beg you to follow them to the nearest cash point
to give you money. There was a time I traveled out with Yinka Quadri,
carrying just one small bag. I came back with nine bags, and even left
some with a friend, Sound Image, in the United Kingdom.
Our fans always stand by us, they
appreciate us a lot. I was amazed when we got to Dele Momodu’s house
and the children greeted us traditionally. Funny enough, he speaks
Yoruba to them at home. He was the first person that launched our movies
with big cash. I don’t want to mention figures here but at the end of
the day, the four of us that went to the UK came home with nothing less
than 5,000 pounds, so imagine coming to Nigeria with such money and
bags, they will immediately conclude we are into drugs.

A woman ran into us and begged that she doesn’t have much on her that
in two days time, she would be back for us and truly, she went to Italy
and came back with beautiful pairs of shoes for me and Yinka. That shoe
is still at home. I don’t throw things like that away. Is it Mama
Islar, Sati Rahmon or Banke Kitchen and Stores, who is God-sent to me?
When I was sick, she would call all the way from London and ask me to
get someone to drive me to the bank as she would raise money on my
behalf in London and send it to me. She will reel out the names of all the donors and how much each person gave. God will continue to
guide her. I believe I don’t have a mother but there are some God-sent
mothers surrounding me. What about Mama Oyo? I know her from nowhere,
she came to my office and told me she wanted to say hi but on leaving,
she would drop some money for me. God was able to let me know that even
with my critical condition then, I never lacked. I was down, not working;
yet, I was able to take care of the home front. I pay my children’s
school fees. I can’t exhaust the list if I should start calling names of
people that God sent to me during my trying period. When I saw the
amount of money Alhaja Salawa Abeni gave me, I burst into tears, she
consoled me by asking if I won’t do more if I found her in such a
condition.
You are a twin, are you the only twin in your family?
No, we are four sets of twins but the others did not survive.
Even your surname, Hassan means Taiwo.
Yes, only that I don’t want to go by the name, Taiwo Taiwo, it was
one of my Alfas that do call me Al Hassan and I like the name, so I told
my father that I would adopt the name, Hassan Babatunde Taiwo.

During your trying period, what role did your friends play?
They tried their best

Cuts in…because there was a story way back then, pointing accusing fingers at Yinka Quadri
But you should know that when things like this happen, series of
things would be said, even between a husband and his wife. People went
as far as telling me that my sickness from somebody very close to me;
like cloth to the skin; won’t you think it may be your wife or your best
friend? But if you are a believer, you only need to commit everything
to God Almighty. I have no other person than God, if anything is
troubling me, all I need do is perform my ablution and talk to Him. As
one grows older, one needs to also get closer to God.
How old are you now.
I am over 50 years now.

You were able to reclaim your position after your recovery at a very swift pace…
I don’t know o, it’s just God that did that, not me. Let’s just give
him all the thanks. And if that is causing any bad blood again, the
people concerned should please also work hard, so that they too will
succeed at a very swift pace, as you have said.
You also had your first baby boy after your recovery
Yes, it is true, his name is Alleed. It’s not that I don’t have a baby boy, then but we lost him.
I also learnt he is from another woman
Yes.
But do you remember telling me that the fact that your wife had
only girls for you doesn’t mean you would marry a second wife to give
you a male child, what happened?
Honestly, I was on the point till this happened. At my age, no one
will beat me for whatever it is that I do, but, whatever God says will
surely be. I can’t deny a pregnancy I know and I’m convinced that I am
responsible for because of one thing or the other. What if the same
thing happens to one of my daughters, how will I feel? I have daughters
and I wouldn’t want anything negative to happen to them. At that time, breaking the news
to my wife was my main concern and I did not send anybody to her. I
called her myself and explained to her and she saw that it wasn’t
intentional but rather destined that such would happen. I also told my
second wife to take my first wife as her mum and accord her all the
respect she deserve.

Your roles in movies portray you as a home builder, is this deliberate?
That is what I believe we can be teaching ourselves. I am closer to
‘alfas’ and I know that some women are beyond mere women, same with men.
They don’t give a damn about anything, they will impregnate a woman and
move on to the next one, without caring for her and the woman will
suffer alone to nurse the baby; the same way we have women who move from
one man to the other. So back to the question, I just see it that I am
doing what God has sent me to do in this world.

300 level medical student plunges into a river after failing exam