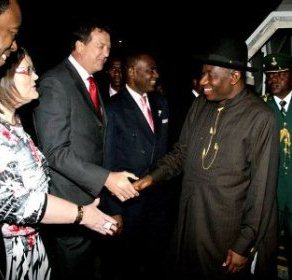 This is a case of thriving at the expense of the masses! Regrettably, Jonathan’s administration is no longer evincing any hope! You would not believe that President and his entourage have spent not less than N3.354bn on foreign trips since 2010.

According to Punch, in the first 11 months of 2012, the President had travelled out of the country at least 20 times, including his trip to Sierra Leone in October and the D8 Summit he attended in Pakistan in November.
In September alone, Jonathan travelled out of the country four times. He travelled to Addis Ababa, Ethiopia for a two-day visit on September 1 for the burial of late Prime Minister Meles Zenawi.
Nine days later, he went to Malawi and Botswana in a cumulative three-day visit for enhancement of bilateral relationships. The President ended the month of September with another trip to New York, United States for the United Nations General Assembly
From February, 2010 when he became the Acting President to December 2010, Jonathan spent N970.891m on foreign travels.
Although the 2011 budget was silent on the expenses for the President foreign travels, investigations showed that about N1.7bn was spent on foreign trips.
According to the 2011 budget, N1.145bn was budgeted for Vice-President Namadi Sambo’s foreign trips.

In 2012, N N684.74m was budgeted for Jonathan’s foreign travels and he had travelled out of the country 19 times.
Although the 2013 budget recently submitted to the National Assembly by Jonathan suggested that N2.6bn would be spent on his foreign trips next year, investigations have shown that much more than the quoted figure will be spent and is being spent judging by the expenses the country incurs during such trips.
The expenses incur include and are not limited to airfares for members of the President’s delegation who will travel on commercial flights, cost of procuring travel visas for them, estacodes for members of the delegation, fuelling of the presidential jets as well as other logistics.
Only the President and his very top aides fly on the presidential jets.
The President was said to have jetted out to different destinations in Africa, Europe, Asia, North America and South America during his Presidency.
Jonathan, in 2011 alone, visited several countries including United States, France, Uganda, Australia, Ghana, Chad, Equatorial Guinea and Ethiopia among others.
The size of his entourage varies depending on the country he is visiting and the purpose of such visit.
While top aides and officials of the Presidential Villa are regular faces on such trips, ministries relevant to the purpose of his overseas trips also send delegations.
Lately, the President had also resolved to always go on foreign trips with two members of the National Assembly (one from each chamber) who serve on the committee related to his purpose of visit.
State governors are also on the entourage.
For example, an online news site, Saharareporters, had in June reported that Jonathan travelled to Rio de Janeiro, Brazil for the United Nations’ Earth Summit with 116 government officials.
Although the Presidency faulted the number, it did not offer the exact number despite a request made by the news site.
The breakdown of the delegation was given as 25 personal aides, 18 aides of Mrs. Patience Jonathan, two members of the National Assembly, five ministers, two state governors, and 63 officials from the Ministries of Environment, Foreign Affairs, National Planning and Petroleum Resources.
When the President visited Brussels for the World Customs Conference in the same month, the same medium reported that he went with about 57 people, including 26 aides, three ministers, eight members of the National Assembly, and 20 other government officials.
The same month, Patience Jonathan was in Maryland, United States, to attend a UNESCO First Lady’s “Youth Infusion” Summit and was reportedly accompanied by 36 people: 18 aides, four wives of state governors, and 14 friends and associates.
Investigation showed that in September 2012, Jonathan jetted out of the country four times. He visited Ethiopia, Malawi, Botswana and New York, United States for the UN General Assembly.
He had reportedly visited Trinidad and Tobago earlier with a 70-member delegation.
Jonathan had said in a national broadcast in January, “I have directed that overseas travels by all political office-holders, including the President, should be reduced to the barest minimum. The size of delegations on foreign trips will also be drastically reduced; only trips that are absolutely necessary will be approved.”
Justice Bulkachuwa: How Atiku, PDP are now in a trap

Related Items:
Click to comment
Why I Married Annie Secretly – 2face Idibia
JMartins and Goldie in Coldwar over video shooting
To Top