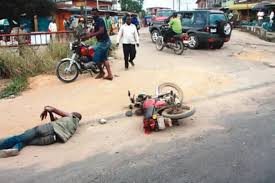 A Bus Rapid Transit vehicle reportedly crushed a motorcyclist, Taiwo
Adeleye, to death, on Thursday, in the Ikorodu area of Lagos.

Apparently, it took a chopper belonging to the RRS hovering around
the scene and a bunch of policemen from different stations to restore
peace in the area, after the colleagues of the deceased went amok.

According to report,  Adeleye had just approached the BRT
lane, speeding, to pick up passenger when he crashed into an iron
barricade and fell to the ground.

The BRT’s back tyre was reported to have climbed on him, breaking his skull open, causing him to die on the spot.

According to Punch Newspapers who spoke to a witness, the incident happened around 8am.

“The motorcycle rider had just dropped a passenger and he rode into
the park. He decided to go to the expressway, after he saw a would-be
passenger.”

“As he rode there, he stumbled and crashed against the barricade and
fell. The BRT driver, who did not see him, just continued his movement
and the bus crushed him to death.”

The victim’s blood and brains were splashed all over the road.

The BRT driver, Oguntoyinbo Akinola was eventually arrested by the police.

The Police Public Relations Officer, SP Dolapo Badmos, confirmed the
incident saying: “A BRT bus killed a motorcycle rider at Agric bus stop
at about 8.15am. The man’s name is Taiwo Adeleye, an indigene of Oyo
State. Other commercial riders rioted, but the command moved in quickly
and restore normalcy.”

Trouble in Kogi State as the first lady, Rashida Bello, allegedly moves out of government house

“The corpse has been deposited at a mortuary in Ikorodu. The family
of the victim has already been contacted and we are aware that they are
in talks with the management of the BRT.”

The spokesperson for the Lagos Metropolitan Area Transport Authority,
owners of the BRT, Kolawole Ojelabi, claimed that he wasn’t aware of
the incident, “I am not aware of the incident. I don’t know anything
about it.”

TRAGEDY! Newly-Wed Drowns Inside Well In Lagos
Dreaded ‘One Million Boys’ members arrested at a Church Vigil
To Top