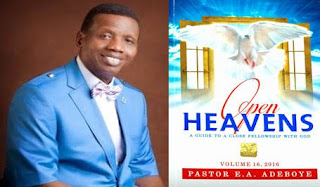 12 Now when he came nigh to the gate of the city, behold, there was a dead man carried out, the only son of his mother, and she was a widow: and much people of the city was with her.

13 And when the Lord saw her, he had compassion on her, and said unto her, Weep not.

14 And he came and touched the bier: and they that bare him stood still. And he said, Young man, I say unto thee, Arise.

15 And he that was dead sat up, and began to speak. And he delivered him to his mother.

At times, children of God lose the import of God’s command, which invariably is for our good if we do not take it as a suggestion but as a command. Positively, one of such commands is one of the shortest verses in the New Testament; “Rejoice evermore.”

In today’s Bible reading, we were given a command; “Weep Not”. This command is easier read than obeyed, but then, it should be obeyed. A widow lost her only son and Jesus Christ commanded her not to weep! This command came before the action that justified it in that situation. To someone reading this devotional, Jesus is telling you; “weep not” because He will intervene in that situation which is causing you to weep. One terrible thing about weeping is that it does not solve the problem at hand. So, why engage in what will not change the situation? Once again I say, “Weep not”. Jesus Christ who asks you not to weep knows what He is going to do about that situation, like in the case of the widow of Nain. The Bible says that Jesus came and touched the coffin that was bearing the dead young man and commanded life to come back to the lifeless body. Death then immediately released the soul of the young man at the command of the One whose Name is the Resurrection and the Life.

Weeping could be very detrimental to those who indulged in it. Apart from being a deviant behaviour against a divine command, it blurs your vision and reasoning. Also, weeping, particularly when God has spoken against it, is an indirect way of protesting against God’s word. It is equal to murmuring which is also rebellious. The Bible assuredly says :

“For his anger endureth but a moment; in his favour is life: weeping may endure for a night, but joy cometh in the morning.” – Psalms 30:5.

Blessed are we, if we believe this scripture. In addition, the Bible says that weeping blurred Mary Magdalene’s vision on the resurrection morning so much that she mistook Jesus Christ for a gardener!

“Jesus saith unto her, Woman, why weepest thou? whom seekest thou? She, supposing him to be the gardener, saith unto him, Sir, if thou have borne him hence, tell me where thou hast laid him, and I will take him away.” – John 20 : 15.

An antidote for weeping is the reading of God’s Word concerning His promises to us in time of trouble. Another one is high praises to God who specializes in reversing the irreversible. The Bible says that when David was distressed at Ziglag because his wives and children had been taken away by raiders, he appealed to God for consolation, and he was not only consoled, but was also assured of the reversal of the unpleasant situation. Beloved, trust the Lord for the reversal of that seemingly unpleasant situation in your life and that of your loved ones and you will laugh last.

Prayer Point: Father, please wipe away all tears from my eyes by removing those situations that cause me to weep today.

Couple that rode on superbike to their wedding explain why!
Family: Singer 9ice pays tribute to all his 4 children as he marks birthday (Photos)
To Top