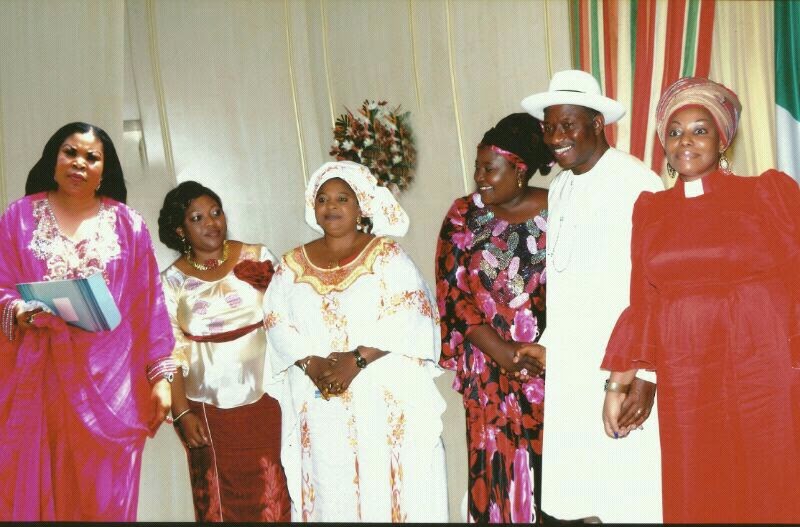 The reelection bid of President
Goodluck Jonathan received a major boost Wednesday, as a group of female
clergy, Women in Clergy, threw their weight behind his aspiration by endorsing
him for a second term in his office.

The decision of the group, comprising female pastors and other Christian women,
was disclosed by its President, Prophetess Nonie Roberson in a statement issued
in Abuja.

According to her, the women decided to endorse the president because after
seeking the face of God, ‘’we heard Him tell us that President Jonathan is the
man for the season,’’ adding that God has not removed the mandate from the
president. Nigerian women in clergy is a faith-based women group that comprises female
pastors, pastor’s wives and Reverend Sisters who believe that they have strong
and united voice to always stand and defend the truth. The women believe that
the nation can only move forward through the prayers of Nigerian women.

It will be recalled that the clergy women have remained very critical of happenings
in the country since its inception. They had been at the fore-front of the
campaign against incessant bombing of soft targets by the Boko Haram insurgents
and had at different points picked up the sponsorship of victims of Bomb
blasts.

Speaking on their resolution to endorse Mr. President, the women of God said,
“We have the mandate of God because we are like watchmen; we have sought the
face of God, we have prayed and we are not ashamed to say that the scepter is
still in the hands of Jonathan. Though the battle will be fierce, we are not
moved by sight or what we see; we are moved by divine direction. Jonathan will
come back.

“Women in Clergy is 100 percent for Jonathan”, Roberson said.

Speaking on the reasons behind their endorsement, Roberson said, the number one
reason is the fact that God instructed them to do so.

“The most important reason is the fact that God said so. And aside that, if we
are to take off our spiritual cap and put on that of intellect, he is still the
best man for the job.

“Forget about the propaganda that is going on; there is no leader in this
country that has affected and pushed the cause of womanhood as President
Jonathan has done.

“As women, we have been able to move away from the noise about change or
transformation and researched into things President Jonathan has accomplished
in office and discovered that he has outperformed all those that came before
him”, Robertson said.

According to the group, it is funny when people say the president is clueless
or slow, adding that taking a look back at where the country was when the
president took over, shows that the nation has made tremendous progress in the
right direction.

“The nation has moved forward in a steady manner, which is better than having a
Buhari who will come in and move us rapidly backward. As women, who God has set
as watchmen over this nation, we will not allow that to happen. How do we
support a man who wanted the office of the First Lady scrapped. We are not sure
what other obnoxious laws would be made to enslave us in future. We still want
to enjoy the current religious freedom we enjoy, and nobody is going to change
the positive direction we have being moving”, she said.

On the strategy to be employed by the group in rallying support for the
president, Prophetess Nonie said the group have been praying, fasting and
holding night vigils for the reelection of the president.

She however added that they are not ignorant of the fact that faith without
work is dead, and for that, they have decided to employ the Nehemiah model, by
also taking the campaign to the people on the street and in the villages.

“We are embarking on a sensitization programme for women and youths, by
showcasing what the president has done in the last four years.  Our tentacles
goes right down to the grassroots; just yesterday, we had women from all over
the states including Borno here in Abuja for a strategy meeting, and by next
week, we shall start visiting and giving them tools in different languages. We
cannot afford to go backwards because of change”, she said.

“It has also become paramount we ask Nigerians if they truly know what change
means; are we changing for the better or for the worse. This is a man who has
come to revive the moribund rail system, a man who has come to ensure that
several lands are been used for farming, he has made sure that food items
prices are stabilized reasonably. What about 35 percent affirmative
action.  We are not just showing our support for Mr. President. We have
seen with both spiritual and physical eye that he actually mean well for the
country. The Youwin project is one of the many interventions of Mr. President
on how to empower our young people. We are happy he thinks about the poor. We
all know that many people are facing challenges in the country, but slow and
steady wins the race.

“This endorsement is a mandate. It’s to tell Mr. President that we will
carefully monitor his government if he returns come May 29. We advise him
to choose those who will work with him carefully as iron sharpens iron. We will
be very critical of Jonathan’s second term, hence he just needs people who are
ready to work and make sacrifices for the nation in his cabinet and other
important areas of government. There are several issues he needs to address in
his second term. Unemployment is undoubtedly an issue which we expect
technocrats to handle. We must not allow wrong people in government as we make
to return Jonathan in May. He has tried in the area of job creation, but many
are still jobless. We need him to employ the service of people who are
passionate about job creation. We want him to also look at housing in FCT.
Houses are very expenses in Abuja and few other states. We want him to step up
in that area. We will hold him accountable if the target we will set for him is
not met. People should hold leaders accountable for any failure instead of
calling for their “heads” or calling for some utopian change.