Dear KFBers, just be before you go to bed..we have got loads of interesting stories in tonight’s #MajorHeadlinesYouMissedToday feature. 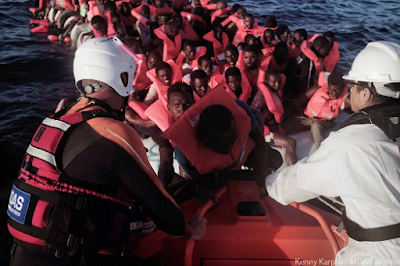 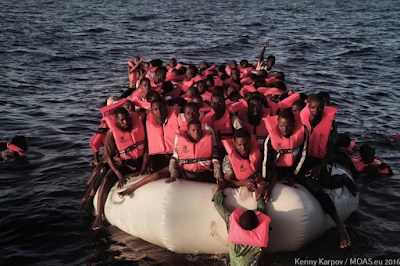 At least 273 lives were rescued by the Migrant Offshore Station (MOAS) responder crew this morning, September 14th. Despite the boats having taken on a lot of water and the African migrants falling into the sea, MOAS search-and-rescue crew was quick to deploy the CentiFloat in order to avoid another tragedy.

Water was distributed as people began to recover and started to feel safe for the first time in a long while. 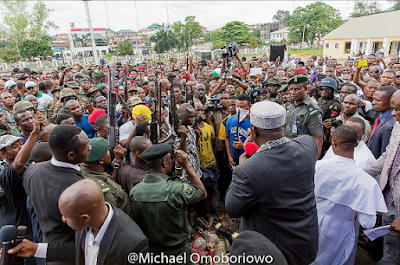 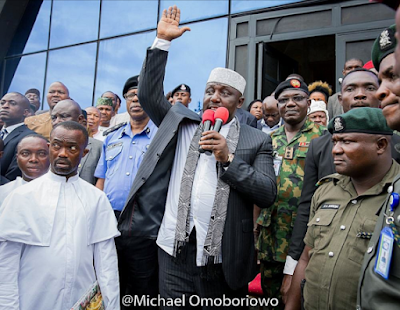 Repentant ex-militants in Imo state were today granted amnesty by the state governor, Rochas Okorocha, a‎fter they surrendered their weapons to the state government and vowed never to return to their old ways. The governor received them at the Victory Chapel at the government house, prayed for them & advised them to shun violence, oil pipeline vandalism, cultism & other criminal activities.

Boko Haram: Don’t get killed in the name of investigation – DHQ warns journalists

Nigeria’s Defence Headquarters has issued a warning to journalists against embarking on coverage of security risk areas in the North East for documentary purpose and the likes without due authorization from the military authorities.

Its spokesman, Brig.-Gen. Rabe Abubakar, in a statement on Wednesday said the practice was not only capable of jeopardizing the success of the on-going military operations in the area but also posed great concern to the safety of such journalists.
Continuing he said, “Much as the military is not trying to gag the press from carrying out their legitimate duties, permission should be sought from the Armed Forces before embarking on such venture.
“This will enable adequate security to be provided for such journalists by the military. Even though Boko Haram has been substantially decimated any roaming journalist could be a target of unsuspecting fleeing Boko Haram member and this will not be in the best interest of media organizations and the nation at large.

“It is, therefore, advised that any journalist desirable of covering conflict areas should seek permission from the military hierarchy so that adequate security arrangement could be provided by the troops on the ground.
“It is also the responsibility of the military to safeguard the lives and property of the Nigerian citizenry including law abiding journalists in the theatre of operation and in Nigeria in general.”

Governor Nyesom Wike of Rivers State has stated that the recent outburst by Edo State Governor, Comrade Adams Oshiomhole showed that he (Oshiomhole) was afraid of impending defeat in the forthcoming governorship election in the state.

Wike stated that Oshiomhole’s inconsistencies had proven that the people of Edo had rejected the All Progressives Congress in the state.
He stated that it was “completely” untrue that he and his Delta State counterpart, Senator Ifeanyi Okowa, mobilised militants to Edo State.
The governor further denied the allegation by Oshiomhole that he sent N2 billion to Edo State PDP governorship candidate, Osagie Ize-Iyamu.
Wike, who spoke when he granted audience to the Inter-Party Advisory Council, Rivers State chapter at the Government House in Port Harcourt, said it was shocking that Oshiomhole still believed in drama and lies.
“Oshiomhole even cornered me and said ‘don’t mind these people, they don’t know that we meet and talk.
“If Oshiomhole has lost the confidence of his people, he should not blame me. He brought the President and 10 APC governors and he was not satisfied. Just because two PDP governors visited Edo State, Oshiomole is panicking.
“Today in his notorious inconsistencies, anywhere Oshiomhole goes, he insults the former President. When President Buhari leaves office, Oshiomole will do the same to him,” Wike added

Nigerians eat too much rice, that’s why it is expensive – Audu Ogbeh,

The Minister of Agriculture and Rural Development, Chief Audu Ogbeh, on Wednesday in Abuja said Nigerian businessmen demanded 2.5 billion dollars (about N492 billion) a week for importation of goods and services into the country.
Ogbeh made this known in a meeting with officials of VICAMPRO, an indigenous Agro Company investing in production of Irish Potato on Wednesday in Abuja.
He said that the ministry was willing to support local investors with capacity to produce goods and save the country’s foreign exchange.
He said that the consumption of rice in the country was rising and that a lot of people were not aware that the rice had some degree of arsenic.
The minister said that consuming rice in large quantity on a regular basis was a bit of health risk, adding that substituting it with potato would be welcomed development.
“The volume of importation of virtually everything into this country is too much.
“The demand for dollars in this country as at today is 2.5 billion a week; this is the quantum of dollars Nigerians are asking for to import things.

“Since 1986, we began this habit of importing everything and doing virtually nothing at home to sustain ourselves; now, we do not have the dollars and people are very hungry.

“This day was coming anyway, no matter who was in power; we have the most ridiculous method of devaluing our currency; every week, we auction the dollar and naira goes up.
“We sat and were hoping that by devaluation, we are going to arrive at Eldorado; if we continue like this, it will be a thousand naira to a dollar,’’ he said.

The Jigawa State Police Command on Wednesday said it had arrested a 30-year- old man, Haruna Barde, for allegedly killing a 70-year -old woman and her son in Jahun Local Government Area of the state.
The Police Public Relations Officer, Alhaji Jinjiri Abdu, confirmed the arrest in Dutse, saying that the incident occurred on Sept. 13 at about 10.30 p.m. in Nahuce village of Harbo town in Jahun Local Government Area.
Abdu said that the victims were 70-year-old Zainab Abubakar and her 50-year-old son, Hassan Abubakar.
He said, “On Sept. 13, we received a report around 10.30 p.m. that one Haruna Barde of Nahuce, Harbo town in Jahun, allegedly attacked one Zainab Abubakar with machete.
“The 30-year-old Barde also attacked the woman’s son, Hassan Abubakar, who tried to save her.
“Upon reception of the report, our men immediately arrived at the scene, rescued and took the victims to hospital and arrested the suspect.
“However, the woman and her son both died minutes later due to injuries they sustained.”
The police spokesman said corpses of the deceased had since been handed over to their family for burial.
He said investigation into the case had commenced, noting that “it is only after investigation that we will know the reason for the attack.”
2023 Presidency: Pastor Tunde Bakare reveals where Buhari’s successor should come from


Court sends man to prison for drowning his brother

A Magistrates’ Court in Abakaliki has remanded one Ogobuchi Ogbonna, 25, in prison custody for causing the death of his relation, Wisdom, by drowning him.

Ogobuchi allegedly tied a stone to three-year-old Wisdom’s waist and threw him into a stream in their area which got him drowned.

The incident occurred at Ndievor-Nchoko, Igbeagu community in Izzi Local Government Area which is within Abakaliki magisterial district.
The suspect was arraigned on a one-count charge of unlawfully causing the death of Wilson on Sept. 9, which is punishable under the Criminal Code, cap 33: Vol 1; laws of Ebonyi 2009.

The accused, who pleaded not guilty to the charge, had no counsel to represent him in the matter.

The Magistrate, Mr Nnachi Olughu, ordered that the suspect be remanded in prison custody till Nov. 18.

The magistrate also ordered that the case file be transferred to the Director of Public Prosecution for necessary action as the court lacked the jurisdiction to handle the matter. (NAN)

4 Comments
After 3 years of enemity, Oge Okoye and Egor Efiok kiss and make up in California (Photos)
Thursday daily devotional by Pastor E. A. (Open Heavens 15 September 2016) – You are not Condemned
To Top