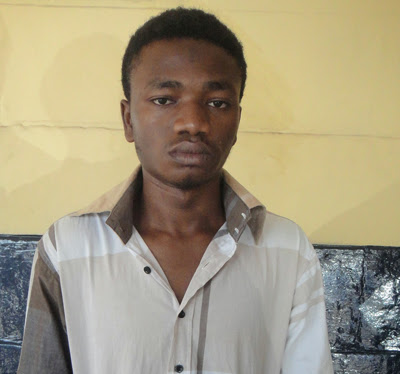 A Nigerian student Mustapha Musa Osmanu studying in Ghana has
been arrested for the gruesome murder of one of his brothers
Osmanu, 23, who is studying Information Communication
Technology (ICT) at Sikkims Manipal University, Accra, allegedly stabbed two of
his brothers at their home in Accra Newtown last Friday, after been high on cocaine.

Nazifi, who happens to be the oldest of them all, died immediately, while the
other brother that was stabbed,  Jamiru,
is recuperating at the Korle-Bu Teaching Hospital.
The police say Osmanu had sneaked into their kitchen around
3.30pm, picked a knife and first stabbed Jamiru Osman, 23, in the chest before
stabbing Nazifi Osman Mohammed, 27, in the chest and the stomach, leading to
his death.

In his statement to the Ghanaian police, Musa claimed said he was under the
influence of drugs – he had taken 20 doses of Diazpam 5gm tablets, to enable
him study that night but it backfired.
“I admit committing the act. I
regret my action and I even wanted to commit suicide after the act but Jamiru
took the knife from me. I was out of control after taking the drug. I regret
having taken the drugs which enables me study for more than five hours a day…”
he said
The Accra
Regional Police Commander, DCOP Christian Tetteh Yohuno  confirmed the arrest, saying “Jamiru
narrated that after seeing the intestines of Nazifi gushing out and blood
flowing from his stomach, he immediately had to pretend he did not see the one
who stabbed them after he was asked by suspect whether he saw something. The
victim said if he had said yes, Musa Osmanu would have killed him instantly
which was why he said he did not know the one who stabbed them,” DCOP Yohuno
said.
COVID-19 treatment centres shut down in Lagos, Abuja

Wow, Davido’s Epic response to fan who cussed out his late mum
Jude Okoye’s one week old daughter is a cutie
To Top