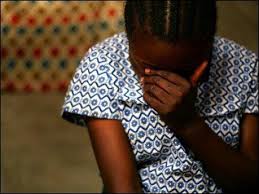 A newlywed 18 years old lady, Rahma Hussaini, has slaughtered her newly wedded husband at Darmunawa quarters of the metropolis.

Vanguard reports that she committed the offence today in her
matrimonial home after a quarrel with the groom also identified as
Tijjani Basiru (24).

Isa Alhassan, a neighbour who witnessed the incident disclosed that
the young couple got married last Friday, pointing out that “from what
we heard the union was a product of forced marriage. We were alarmed by a
frightening scream of a subdued man in need of rescue and we rushed to
discovered that the man of the house was in his pool of his blood.
Neighbours mobilized and took the groom to the hospital but doctors
confirmed him dead on arrival”.

The eyewitness disclosed that the bride was handed over to the police that arrived in good time following a tip off.

Confirming the tragic incident, the police image-maker, ASP Magaji
Musa Majia said that Rahma Hussaini of Darmunawa quarters stabbed her
husband, one Tijjani M Basiru on his stomach with a knife and was rushed
to AKTH.

The exact cause of the attack is yet to be ascertained.

It’s hard to believe Omoni Oboli is a mum of three! See all the photos from the AMVCAs nominees brunch
9-year-old girl ‘donates lunch money to the APC, see the letter she wrote to them!
To Top