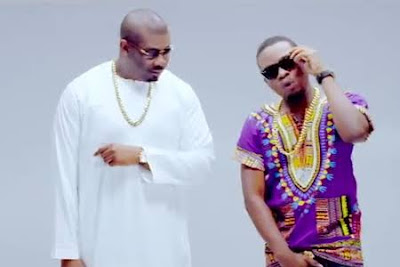 Blogger Loladeville has just shared her take on the trending issue of the moment and i kinda agree with her…enjoy!

The 2015 /2016 edition of the Headies ended on a dramatic note. No
thanks to lead actors, Olamide and Donjazzy. The brouhaha started when
Mavin Records artiste, Reekado Banks won the next rated artiste award.
Nominees ( Reekado Banks, Kiss Daniel, Cynthia Morgan, Korede Bell, Lil’
Kesh)
That grew thorns on Olamide’s skin who felt his protégé Lilkesh should
have clinched the prize. Many of the YBNL fans also registered their
displeasure on social media, with many suggesting that Don Jazzy
‘bought’ the award for Reekado.

My take on the issue.

1) Olamide’s pain was very understandable. Yes his crew was nothing
short of hardworking last year.  But he should learn to keep his
emotions in check.

2) The Award was through a voting system. Apparently Reekado had more
votes than Lilkesh. Can the organisers do us a favour by revealing the
number of votes both parties garnered.

3) Donjazzy’s remark wasn’t that pleasant. Candidly, it is difficult not
to see that as a shade. What fuelled Olamide’s anger was Donjazzy’s
suggestion that the car was more important to his crew (Lilkesh). That
read like a scorn than a joke. Besides, dude was angry and apparently
had not calmed down at the time Donjazzy walked up to the stage. Yes We
all know he can be witty and mischievous but he could have let sleeping
dogs lie.

Babasuwe returns to Nigeria, visits Iyaadura to show appreciation for her N10m contribution

4) Olamide’s tweets were uncalled for and reeked of immaturity. He went
too far with the insults. Yes, Don Jazzy was wrong to have dragged your
name in the whole mess. But all those insults. All for an award?
Donjazzy gave you one Congo of “taunt”.  You replied with two trailer
loads. Kilode? Whatever happened to the spirit of sportsmanship. You
(claimed you) were cheated. Life happens. Learn to lose gallantly.

5) I strongly hate voting form of awards. Most times the award goes to
the undeserving. It is supposed to be rewarded by credible umpires and
not by the number of votes a nominee can garner. Not all of us agree
with Lilkesh’s lyrics but let’s be honest, he had a more fantastic year
than Reekado Banks. If Donjazzy spent money and time soliciting for
votes for Reekado (which I think yielded great result), pls what did you
do for your boy? Well maybe he did sha but Donjazzy’s method was more
pronounced.

6) At the end, they will sheathe their swords. You people should not go
and break bottle on your heads for these rich honchos. These artistes
like politicians will makeup and (don’t be surprised)  hit the studio to
sing about this experience.

7) Hiptv should organise a concert for losers and give them prizes. Abeg that one na joke o.