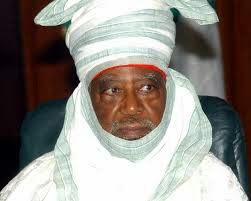 One Hauwa Momoh, 48, has come out to announce that she  was the mistress of the late Emir of Kano,  Ado Bayero.

Despite having four wives, Hauwa claimed the Emir still maintained a
secret affair that lasted about 30 years with her, adding that she is
just one of the sixteen women he banged.

In a long letter sent to Premium Times, Hauwa who is also the
daughter of a former senior traditional ruler in Edo State, the Otaru of
Auchi, revealed how she met the Emir and how their secret affair
produced two children.

“The relationship started back as 1984 when my father referred me to
him, to help me gain admission into BUK. I have always wanted to study
in BUK…however, I found out I was pregnant when in 1986 when I was in
London, and as I got back I told him I was pregnant for him, he then
said we will get married after I put to bed because Islamically it’s
wrong to marry someone who is pregnant, ” she narrated.

On travelling back to Auchi to break the news to her father, she was
sent back to the emir, and vowed she would not be allowed to have her
baby in his house without marriage.

Fifteen years later, a second child, a boy, arrived. She did not
return to school and appears never to have been in any gainful
employment.

“I stayed in Kano for 32 years, the Emir was very nice to me while he
was alive, he took care of me and our two children, and he gave us
money, he was indeed a nice man before he died,”

However, since his death, things have not remained the same – she has
been struggling to survive and cater for their two kids, since his
demise months ago.

Hear her “I have no shelter over my head, my children hardly eat and they are not even in school like their peers,”

Before his death, the emir directed one of his sons, Nasir, to ensure
that Hauwa and her kids lacked nothing but Nasir has failed to fulfil
that directive.

“Nasir knew us very well. In fact, he used to come and give us money
for upkeep when his father was alive but after the emir’s death, he
stopped caring”

She told Premium Times that she met Nasir on several occasions, to
convey to him how desperate she needed help but it turned out futile.

Ms. Momoh said today her children are no longer in school, as they
roam the country looking for shelter. She is currently in Abuja
squatting with a friend and struggling to survive.

“I almost slept at the central Mosque in Abuja, I have no savings, I
have no roof over my head, my first daughter is due for the university
but she is with me, my second son has been out of school for over a year
now. We find it very difficult to eat. And all this became worse after
the Emir died,” She explained.

The online portal reports “Now she said she is prepared to end her
life and her children’s after the emir’s family left her and her
children homeless, and shut off all avenues of support she hitherto
received for herself and children.

She told this paper she was sent N250, 000 from Kano with a request
to stay off the media. The money lasted two days as it could not sustain
the lifestyle set for her by the emir while alive, she said.

Ms. Momoh said she was promised another N2 million as settlement, but
she has dismissed that as too meagre, given her current needs, taste
and the family’s wealth.

On Friday, after turning down the N2million she was offered, Ms.
Momoh said she and her children had agreed to commit suicide if no help
came by the weekend.

“Just in case we don’t make it to Monday, tell our story,” she quipped.