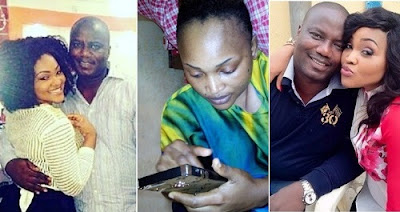 BON is exclusively reporting that Lanre Gentry has declared Mercy Aigbe as a Mentally Unstable Woman.

Read Below the report from BON.
Larry Gentry, the businessman husband of actress, Mercy Aigbe, has
sensationally revealed that his wife and mother of his son, is mentally
unstable. In a chat with BONONLINE, Wednesday morning, Larry said,

“Mercy has mental issues and i am the one who knows how many places
we’ve been to so she can remain stable. I have papers to prove these.”

Larry, who has come under several attacks for allegedly beating the
popular actress, disclosed that contrary to the news that made the
rounds, it was Mercy that ganged up with her friends in her designer,
Luminee House, to attack him. He claimed that while the others beat him,
his wife hit him hard with a stool.
Invoking biblical curses on himself, the auto merchant sweared that
he has never beaten Mercy in their seven years of marriage despite the
fact that he has caught her several times frollicking and fornicating
with different men.
He gave an example of last year when she said that she was going to
China for two weeks but instead, spent the whole time in a Dubai hotel
with a man.
To lend credence to this claim, Larry showed us different whatsapp
conversations to buttress this allegation and a particular one where
Mercy was asking a third party to get some dollars from the man for her.

“When I challenged my
wife, she said she only wanted to collect money from him – a married
woman!!! But i discovered that it was the same man that paid for the
Magodo house she just moved to, which i also found out had been rented
over a month ago.”

Continuing, Larry said, “See, i understand Mercy’s antics too
well. All she wants is to move out of my house and be free to live the
life of a single woman. What i have tolerated from her all these years,
no man can tolerate from any woman.” He said further that as a husband,
“I worship mercy and I have deposited N8m at Benefit Motors to buy her a
N16m Range Rover ENVOGUE for her 40th birthday. I have also paid N1.2m
for a hall opposite Sheraton Hotel to celebrate her big but she has her
eyes on other things.”
Asked why he has not consulted her family to intervene, he says Mercy
has no regard for her parents, citing an example of last year when her
dad collapsed while on the queue to get his pension and was rushed to
the hosipital.
When the actress was informed, Larry said she lied that she was in Calabar and till now, had not gone to see the old man.
He claimed that he was the one that went there and spent about
N180,000, adding that because she refused to take care of her mom, he
put the old woman on a salary of N25, 000 per month.
Attempts to reach Mercy were unsuccessful as at the time of posting this story.

Meanwhile,  here’s a video of Actress, Mercy Aigbe when she packed out of her Matrimonial Home.

Watch the video, which was obtained by BON below:

Video of the day Mercy Aigbe packed out of her matrimonial home
A post shared by Instablog9ja✅ (@instablog9ja) on May 3, 2017 at 2:43pm PDT

BON is claiming that Mercy Aigbe’s Refusal to cook for her husband caused the “alleged beating”, before she then moved to magodo.

Below is how they narrated the story:

On Easter Sunday, Mercy’s husband on his way to his office gave her money to cook and bring to his hotel in oregun as he was going to be having friends visiting him but hours after he got to the hotel,His wife stopped picking his calls and he made enquires and learnt that his wife had gone for a party without even preparing lunch or dinner for their son who had to make do with pizza for the day.
Later that night,Larry on learning that his wife was in her designer’s house{luminee} went there and asked her to come home,she refused saying she was tired of the marriage ,This infuriated Larry who beat Mercy to stupor and drama started with both calling each other day names and Mercy vowing never to step into his cursed house again, Mercy cried and cried but she and Luminee were helpless and could not fight him, After Larry left mercy was taking to an hosipital and immediately called an Estate Agent the following morning and within 48 hours moved to Magodo.

ASUU strike: FG reveals what is delaying reopening of Universities

Attempts to speak with both Mercy and Larry Friday evening was unsuccessful as phonecalls were not picked,Those who should know say both have just been tolerating themselves for 4 years now as Mercy Laments to people she has had to be father and mother as her husband’s financial status has dwinded while Larry Associates cried that mercy has not been a faithful wife and Larry has always been on the Edge checking her calls and messages and they are not surprised that this is happening,one point to years back when the husband almost beat her because she disappeared at a nightclub where an event was held to honour her and her phone was suddenly off, They later made a video denying it.