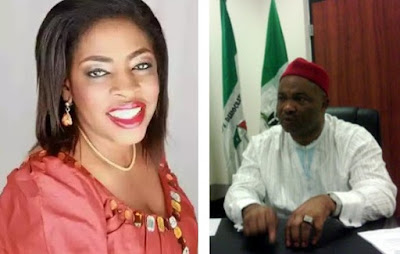 Just imagine the mess this beautiful lady’s husband has revealed, which lead to her death. See details…


This is to inform you that Chief Mrs
Ukachi EKENULO AKA HON UKACHI AMAECHI Whom you infected with HIV VIRUS,
deceived her out of her marriage, with fake promises to marry her is
DEAD; isn’t her blood on your head?

How do you feel that in the recent years, 2 married women and one other
single girl you were meddling with and dating, have died of illnesses
arising from HIV complications??
Twitter ban: Lai Mohammed warns Nigeria using VPNs

Recall the suit I filed against you in federal high court Lagos sometime
ago on this vexed issue of infecting Ukachi with HIV VIRUS which I
didn’t pursue further following the intervention of common friends of
ours but with the demise of Ukachi arising from HIV/AIDS and kidney
complications, I may have to return to
court, if not for any other thing, for the world to know how Ukachi’s
journey to death, a wicked death, a shameful death, a premature and
painful death started in your hands. 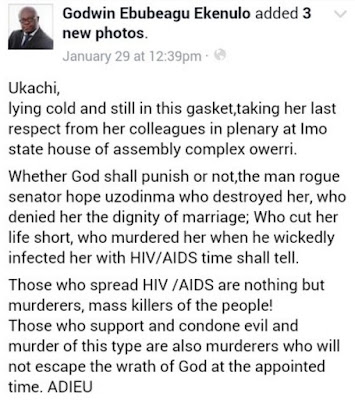 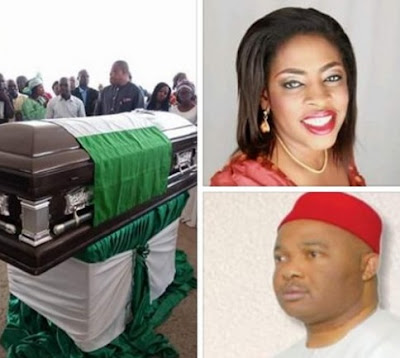 Furthermore, with the no-nonsense type of federal government in place by
President Buhari, I may have to petition IGP to bring you to book
following all the attempts you did made to kill me for speaking out
against your sordid affairs with my then wife Ukachi and exposing the
fact that you don’t have a genuine WAEC certificate.


Only in a terribly corrupt country can a notorious 419 kingpin like you,
a man who lack sufficient personal integrity, a man who claims to have a
fake masters degree, a man who claims to have obtained HND from FUTO Owerri a university not established and accredited by NUC to run HND programs, a wicked and demonic man like you can find himself in the senate through a fraudulent and criminal electoral process.
Miracle! How girl stolen by tenants and sold three times was finally recovered 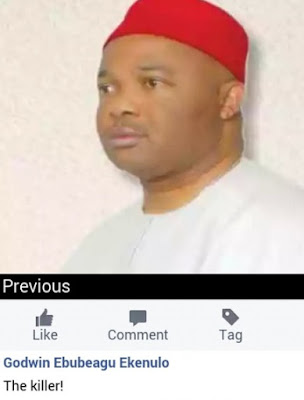 The husband concluded; “I am consulting with my lawyers!!”

Bovi Eulogizes Mother, Recounts His Last Moments With Her
The ‘Understanding Purpose’ conference for Music lovers in Lagos was a huge success (photos)
To Top