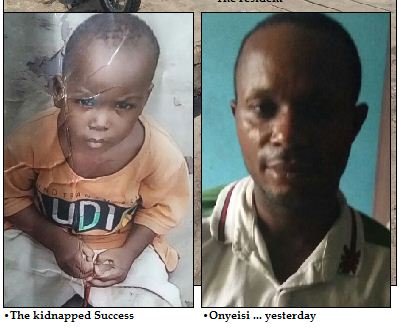 Godwin Onyeisi has
been heartbroken following the mysterious disappearance of his
three-year-old daughter, Success from home,since December 22.
The minor was allegedly abducted by a
neighbour, Emmanuel Okpara, who joined the father to look for the girl,
until he was fingered by people who saw him with the child about the
time she reportedly went missing.
Her father, a commercial motorcyclist
said he has spent all his savings – about N60,000 – on police
investigation and other logistics.
Okpara has been arrested and transferred
to the Special Anti-Robbery Squad (SARS), Ikeja, where he allegedly
confessed that he sold the minor for N20,000. But Onyeisi said they do
not know who the buyer is or where he lives.
At their Adebumoye Street, Coconut, Apapa, Lagos home, a troubled Onyeisi told The Nation that he initially did not believe that Okpara, whom he has treated like a brother over the years could kidnap his daughter.

“The worst part is that he (Okpara)
followed me to all the places I went to in search of my daughter, with
the same clothe he wore when he kidnapped her.
“He followed me on my motorcycle to all
the palaces of the Baales, all the streets and all the police stations
we visited, until people who saw him with her about the time she went
missing, told us and the police that he was the kidnapper,” Onyeisi
said.

He said he was at work when his wife called him on phone that she could not find their daughter.
His wife, he said, had left the girl,
who was watching cartoon at home, to quickly buy some of the things they
need to travel to Delta State for the Yuletide.

“My older children went to fetch water
at the well in a nearby compound. They went with other children in our
yard. So, because we were planning to travel, my wife left Success who
was watching cartoon in the room and rushed to the market.
“She was the one who called me  that
they have been looking for Success and have not seen her. Initially I
didn’t really take her seriously because I did not think anyone will
want to harm me or my family.
“When I came back and they have not seen her yet, I started going round the neighbourhood asking questions.

“As we were going round to ask people,
the Baales were sending messages through town criers that anyone that
saw her should come forward with the information.

“For two days, we went round in search
of my daughter and my neighbour was with me all through the period. He
was wearing the same red T-shirt that people saw him with while he took
my daughter away. But he was following me as if he did not know anything
about her disappearance.

“From December 23, we started hearing
information that he was seen with my daughter, but I did not believe it
because Success is very close to him. I have been very good to his
family; I even connected my generator to his house to give them light.
“Whenever my daughter is given  food,
she will take it to eat with him. Once we bath her, she will take her
clothe to him to wear for her. She usually slept in their house, so I
did not want to believe that he was behind her disappearance.

“But three women later came to our
house, among the three was a woman he bought bottled water from while he
was with my daughter. So, the woman now said he saw him with my
daughter and that after drinking from the water, he gave my daughter to
drink and they left.

“I still did not believe what they were
saying. I told them to stop lying against him until my wife got angry
and went and reported to the police that I was also a suspect. That was
how I was arrested with him on December 25 and we slept at the station.
“He was still denying it, until the
women and all those who saw him with my daughter came to the police
station and identified him.

“They even described the clothe he was
wearing, which happened to be the same clothe he wore while he was
following me about. That was how the police detained him.
“After some days, he confessed that he
was the one who took her and that he sold her for N20,000 through
somebody else to a man who lives in Okota.
“He said he cannot remember the man and
the middle man who took the baby to the buyer usually stayed at a
woman’s house here in Coconut.

“I have been going from church to church and they keep telling me that my daughter is alive.
“Okpara should let me know if he has
killed my daughter. If my baby is still alive, he should say where she
is. How can a man like that kidnap a little girl and since then he
doesn’t want to say where she is? Police need to put pressure on him to
say where my baby is.

“I have spent all my savings on the
investigation of this matter. I have been giving the police money so
that the case is not slowed down. Now I don’t even have money to pay for
the school fees of my other children,” he said.

The Police have launched a manhunt for the buyer and the prophet he allegedly gave the child to.
It was gathered that the woman in whose
house the middleman usually slept was nabbed but she was released
because she knew nothing about the case.
It was learnt that the middleman gave the child to a chief, who handed her over to his prophet for sacrifice.
All the locations mentioned by Okpara
have been visited by the police but they were deserted including two
companies at Lekki said to be owned by the yet-to-be identified chief.
The Nation learnt that efforts to nab the suspects have been thwarted by their informants, who have been placed under watch.

“The police are very close to getting
them. We will hunt them down soonest. Both the man who bought the girl
and the one who took her to the buyer are being hunted, we are very
close to getting them and will get them,” the source said.