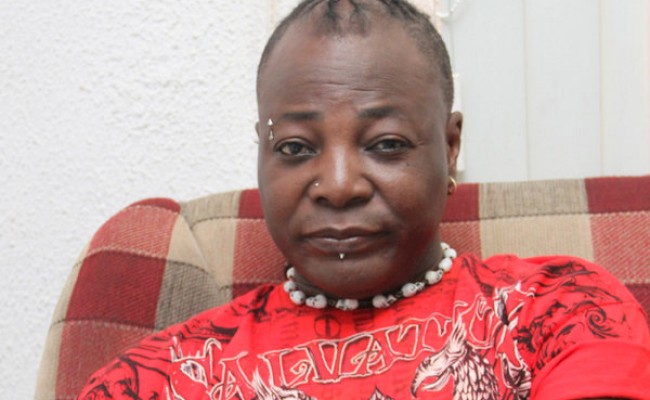 Showbiz impresario, Charles Oputa, popularly known as Charly
Boy has turned a new leaf. The famous Abuja Area Fada is now a fisher of
men. He has abandoned all the razzmatazz associated with entertainment
for the gospel of our Lord and Saviour, Jesus Christ.

In this interview with ENCOMIUM Weekly,
Charly Boy made it point blank that his encounter with Jesus Christ was
the freakiest moment of his life.

What have you been up to lately?

I have been up to all sorts. It is never a dull moment with me. My
whole life is about adding value to people I am opportuned to meet.
Adding value to my environment and just finding a way to be useful not
just to myself but my family and my environment. So, I pretty much stay
busy all the time and if it is a dull moment, I create things for me to
do.

You have been away from the music industry for quite some time now, what has been happening to your music career?

Defining me just as a musician is kind of belittling because I do a
lot more than just sing and dance. I am a lot of things rolled into one.
I keep saying, we are a lot of people in one body. So, I cut across so
many sections and segments, and so it is with people I minister to from
the lowest of the lowest to the highest of the highest. So, defining me
as an artiste is really too cheap. I am more than all of that. As a
musician which I have said so many times that I am not but maybe an
entertainer, I am refreshed because of a sudden change. I am also
feeling that urge to do a lot of things, music wise and thank God you
will soon start to hear about it and the news will soon be in the air.
All the young people that I am collaborating with, I don’t want to
mention names, are people in vogue. I am doing a few things with some of
them and it is exciting. For me, it is just to once again prove myself.
I have always done that. Everything I set my mind to do, I am just
going to be good at it and move on to other things that grab my
attention. 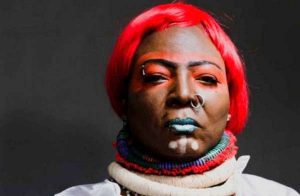 What should your fans expect from you very soon?

You’ve been so controversial on social media lately, what inspired it?

Can you tell us about your encounter with Jesus?

My encounter with Jesus was the freakiest moment, and if you read the
piece I wrote, it is just saying that God really wants us to be real
but the Nigeria perception about Jesus and how it works is just too
Nigerian for my liking. They look at Jesus/God as babalawo or the
pastors make some sacrifices and bring some money and goats and all the
problems will disappear. It doesn’t happen like that and these days
people are not going to church to nurture their spirituality. Rather, it
is either they are looking for babies, wife or husband or promotion. It
is all about the wrong reasons for being a Christian. So, God was just
telling me that in most of these churches they don’t have anything to do
with Christ or God. They are there for business. I was wondering what
does Jesus want from me? Is it for me to intensify my campaign for the
hopeless, the downtrodden, people who have been consumed by this
wickedness in the country. There are a lot of nice people who are losing
their niceties because they don’t know what else to do. They are just
hopeless.

Hopelessness is hanging over their head. They are frustrated,
confused and they want to stay good because they were born good but they
are losing their goodness because of the battle of survival. Like a
young lady, who has been brought up in a humble and decent home but
because she is looking for a job that is not there and her parents
cannot afford to take care of her anymore, she is industrious and nobody
to help. Finally, she resorts to prostitution, whereas under normal
circumstances, she wouldn’t go that direction but it is just out of
desperation. So, those are the souls I am hoping to capture before they
go completely bad. This is what the environment has turned out to be.

Can you please tell us the tings Jesus told you to stop doing?

All those contrived stuff that Charly Boy did and not me as Mr.
Oputa, they have been outgrown. So, I have left them for other people
who want to continue the madness.

What actually inspired your taking a nap in a casket?

It is very comfortable and that’s the final resting place for all of
us. I don’t know why we are scared about it. Actually, the truth is I
was doing a casket commercial for my friend, Tunji, the owner of MIC. So
that was how that picture came up but I sleep on my bed. I don’t sleep
in caskets.

What informed you keeping a python as a pet, what were you feeding it with?

Biafra must emerge no matter how people are killed - Nnamdi Kanu

It shows you can actually train a very wild animal and domesticate
it, but naturally I wouldn’t have anything to do with a snake. I have
always been afraid of snakes. I did not know that I will end up having
one as a pet. They are totally harmless as long as you know when they
feed. They can’t harm anybody when they are full. But I have had enough.
People did not understand it and they were attributing so many rubbish
to it. The snakes was sick and there was no veterinary hospital to take
her to so, I just put her to sleep.

I never confirmed that. I like to keep people guessing and what
people say means that their perceptions is as big or small as where they
are coming from. Which one is my own. I was not created for people.
What they are saying or how they are thinking I’m not bothered because
there is massive ignorance in the society. So if they think I am gay,
good for them. It is not my business. It has nothing to do with me
because I know who I am.

So, if you call me Steven Okeke which is not my name, I won’t answer
you and it doesn’t mean anything to me because that is not who I am. But
if you call me by my name, I will answer you. So, once they start to
attribute things that are not, it doesn’t bother me. they can talk from
now till forever, I am not bothered.

Will you say you have denounced the Illuminati group you used to head in Nigeria?

Na una talk am, no bi me talk am. I don’t even know what illuminati
is. I have asked if they are the people who give us light. They said,
no, it is a cult that. I wonder why I am so broke. 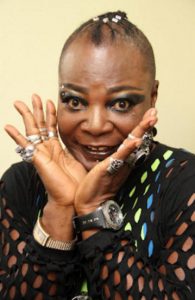 Looking at the rate of marriage breakup generally in the entertainment industry, what will you say about it?

It is an unfortunate thing. I am saddened about it, especially with
my son, the one in America. He is 39 and there is this Nigerian girl
that he is dating. As I was hoping he will get married sooner or later
only for him to turn around and ask me, must he be married, I was like
what are you talking about and he started telling me that he does not
understand this marriage thing. Why can’t he just have a contract with
the girl, maybe we stay for four years, then if we want to continue they
would renew the contract rather than for better for worse. That he
doesn’t understand it.

That also gave me a cause of concern. Marriage is not a bed of roses.
It is for people who have major respect for each other and want to stay
in a marriage.  Marriage is a lot of work and I still want all my
children to get married the traditional way, discipline themselves to
maintain that commitment forever. I discovered that the average youth
marriage, especially in Nigeria doesn’t last more than two years. This
is crazy and terrible. I volunteered as usual, not because I am an
expert or because I came with some experience, I have been married
before my present one that is working out. I have been married thrice
before but they didn’t work out. Now, I think I was immature at that
time but now I am in a better position to at least talk to younger
people and share my own experience. Maybe there is something they can
learn from it or something that I can learn from what they are going
through.

How did you discover the marriage councellor part of you?

It has always been there but not for the public. I am a teacher of
some sort. I have been teaching all of my life, especially as Charly
Boy. Many of these big artistes passed through the Charly Boy Show. Many
of these young people passed through the Charly Boy university. I have
mentored thousands and thousands of people. Because of me and the way I
live my life, they have been emboldened to chase their own dreams and
never give up.

How have you been able to sustain your marriage even with the tales of controversies?

Charly Boy is an image, he is a character, he is not who I am. I am
Mr. Oputa but yes it is not every artiste that can strictly define and
separate their image from what they really are. To some people, it can
get so confusing that they don’t know if they are really that image or
they are somebody else. I am on top of my game and that is the
difference between a character, an image or a personality.