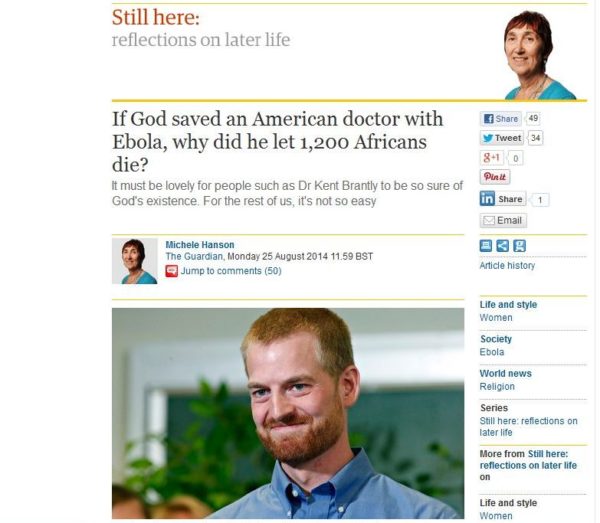 Hours ago, the Guardian US published an article by a author and regular columnist  Michele Hanson about the Ebola outbreak.
The headline reads – “If God saved an American doctor with Ebola, why did he let 1,200 Africans die?”
In the short piece which can be read on The Guardian US’ website, the writer talks about how American Ebola patient Dr Kent Brantly
who recovered from the deadly virus after taking the experimental drug
Zmapp, was chosen by God and not the other 1,200 West African people who
have lost their lives.
Michele says she tried to believe in
God, but later gave up.
Read her controversial article below:


“Lucky Dr Kent Brantly, the American doctor who has recovered from
Ebola, having been given a dose of the experimental antibody serum
Zmapp, whizzed home to the US, and given another dose. He is now
thanking God for saving his life. Through the medical team and drugs, he
admits, but ultimately, it seems, God was in charge. And he chose
Brantly, not the other 1,200 mainly west African people who have died horribly, which seems a bit picky.

It must be lovely for Brantly to be so sure of things. I tried, aged 10,
to work out whether God was around or not, but couldn’t. “What was his
actual shape?” I wondered. And how could he be everywhere, all at once?
How big, for example, was his toenail? Did it cover Ruislip, where I
lived? I imagined him constantly on the go, distant enough for an
effective overview and able to home in on catastrophes and act. But it
was very hit and miss. Would he be on the spot when you needed him, like
Brantly did? On and on I went for years, trying to believe in him. I
even went camping with a tremendously religious youth organisation, but
despite the prayers and observances, even the devout did some
frightfully rude things in their tents. And there was no divine
retribution. I gave up on God, for ever.

Millions didn’t. They seem to be obeying his instructions to the letter,
which isn’t doing the world any favours. But at last, a bit of good
news. The Jehovah’s Witnesses are mellowing. They have a new tactic.
Instead of just knocking on doors, they’re also allowed to stand beside
their literature, smiling, near shops and stations, letting us approach
voluntarily. Marvellous. It’s a shame they didn’t do this years ago,
when my old friend was a Jehovah’s Witness. She was terrified sick of
being sent to knock on our door. Luckily it never happened.

If only all religions would take this hands-off approach and let us all
believe whatever we like. No pressure. I hope that one day, that will
happen. I would say “Please, God,” but I can’t.

With the article, she throws out a deep
question which could be rhetorical about why God would choose one man
and let thousands go.
It is causing quite a stir among active social media users who have read the story.
What say you?!
Ikeja residents panic over massive gas pipeline leakage...Army, police officer on ground

What sickness? GEJ is busy treating files in Germany
This mum killed her son and hid him in a suit case
To Top