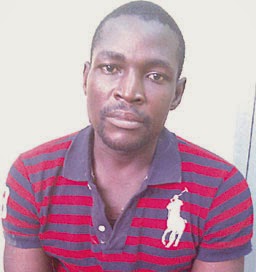 A petroleum tanker conductor, Sani Saidu, has stabbed his master, Shitta Aremu to death so as to steal the product, sell and raise money to travel to Dubai for business.
The 32 year old has now been arrested by the Lagos State Criminal Investigations Department, SCID, Yaba, Lagos.

In his statement to the police, he revealed that he was hanging out at a fuel depot in Lagos when Aremu, alias Baba Oyo, engaged him to be the motor-boy on his truck on a trip to Port Harcourt, Rivers State, to supply 40,000 litre of aviaton fuel worth N5.5 million, but that act was the last for Aremu as his motor-boy murdered him on the way and diverted the product to the northern part of the country.

Reports from the police investigation reveal that the late Aremu whose age was put around 56 years, was a driver to S.K Transport Service Nigeria Limited and reportedly loaded the truck with plate number AGL 368 XA with the product and consequently left Lagos for Port Harcourt on November 13, 2014, to discharge the content.

But leaving Lagos, he was said to have invited Saidu to work with him as his motor-boy, with a promise to pay him an undisclosed amount at the end of the trip.

The police report, according to Saidu’s confession, further states that when, two days later, his employers efforts to reach Aremu on phone, raised suspicions of danger.

They decided to trace the location of the vehicle via the tracking device installed in the truck and were shocked that the truck had been diverted from its original route to somewhere around Mutum Biu, in Taraba State.

The company initially thought their driver had some sinister moves up his sleeves and laid a complaint SCID where detectives swung into action by travelling to Taraba State. Fortunately for them, the truck was recovered at the Taraba Police Command, with only Saidu.

It was in the course of investigation that the police established that Saidu actually murdered his master before diverting the truck to the northern part of the country.

In an interview with the Vanguard Newspaper while in police cell, Saidu, a father of five, narrated how the devil took over him and he stabbed his master to death with a knife, threw him out of the truck and took over the steering, diverting the product to the north, all in a bid to get money to travel to the Dubai.

Wizkid gave Davido a tight hug before walking out of the Headies
Stella Damasus finally confirms having an affair with Daniel Ademinokan, her relationship with RMD and more (Full Interview)
To Top